A Solution for the World’s Pollinators

Our pollinators are in trouble, with numbers dwindling rapidly. We talked to the agritech taking a pioneering approach to our escalating problem.

Many of us don’t spend that much time thinking about how food gets to our table. In the Western world, we take for granted that we can buy what we want when we want it. We depend on a steady supply of food, ranging from meat and grains to fruit and nuts. Now, imagine that there was a weak link in our supply chain, one which threatened our ability to feed the world’s growing population, estimated to reach 9bn by 2050. This is the situation facing us today, with the precipitous decline of our pollinators, of which bees are the most well known.

Natural pollinators have declined significantly - 40% of insect species are in danger of extinction and overall species numbers have declined 60% since 1970. Yet 75% of the world’s crops rely on animal pollinators, creating a challenging situation that requires an innovative solution. Edete Precision Technologies was founded with the aim of solving this escalating problem. The Israeli agritech is using new technology to produce and store commercial quantities of pollen and to mechanically distribute it over large areas efficiently using precise laser sensors that map the contour of each tree.

Commonly known as artificial pollination, the technology has been primarily tested for the last four years on the lucrative almond market, estimated to be worth $12bn by 2025. So far, the results have been positive, confirms Keren Mimran, one of Edete’s founders and the vice president of Business Development and Marketing. For three years in a row, it has proven to secure and increase the yield of almonds. “It really helps us in approaching new markets and new crops,” says the co-founder from her base in Basmat Tivon. 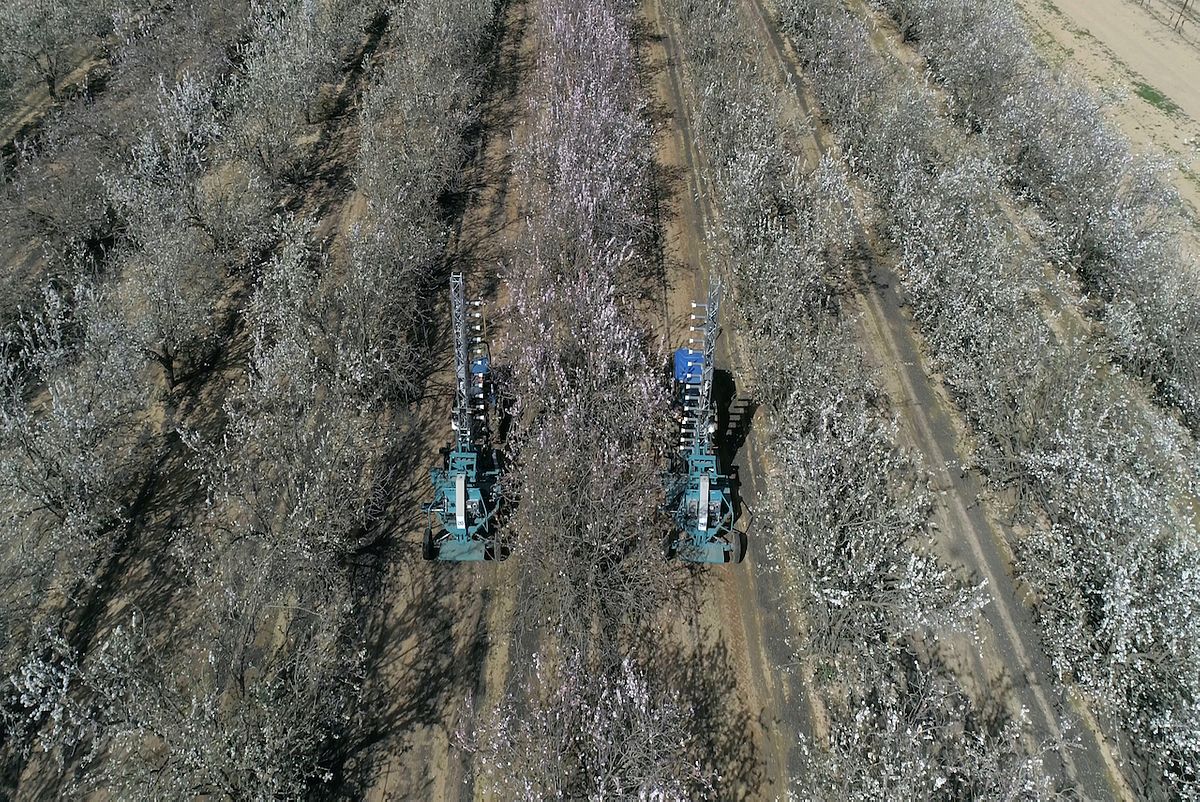 So far, Edete has focused on Israel - where the company is headquartered - and in Australia. It has a pollen production facility in both countries, but its eyes are set on a bigger prize, the much larger Californian almond market, valued at $6bn in 2019 and growing. The state is responsible for over 80% of the world’s total supply of almonds. Edete will begin pollinating almonds in California next February, and has just completed a pilot to artificially pollinate pistachios in the state. Each crop requires adapting and retesting the technology, presenting unique challenges. Nevertheless, there are plans to expand to other crops in time, including apples, pears and cherries.

The growers are incredibly receptive, says Keren, because they realise that natural pollination alone is unlikely to produce the same results.

In the United States, about one-third of the food Americans eat is pollinated by honey bees; but they must overcome a number of obstacles in a pollinating season: rain, loss of natural habitat, pesticides and other chemicals and disease. Honey bees also function best at a steady and limited temperature range, making them more susceptible to a warming planet. 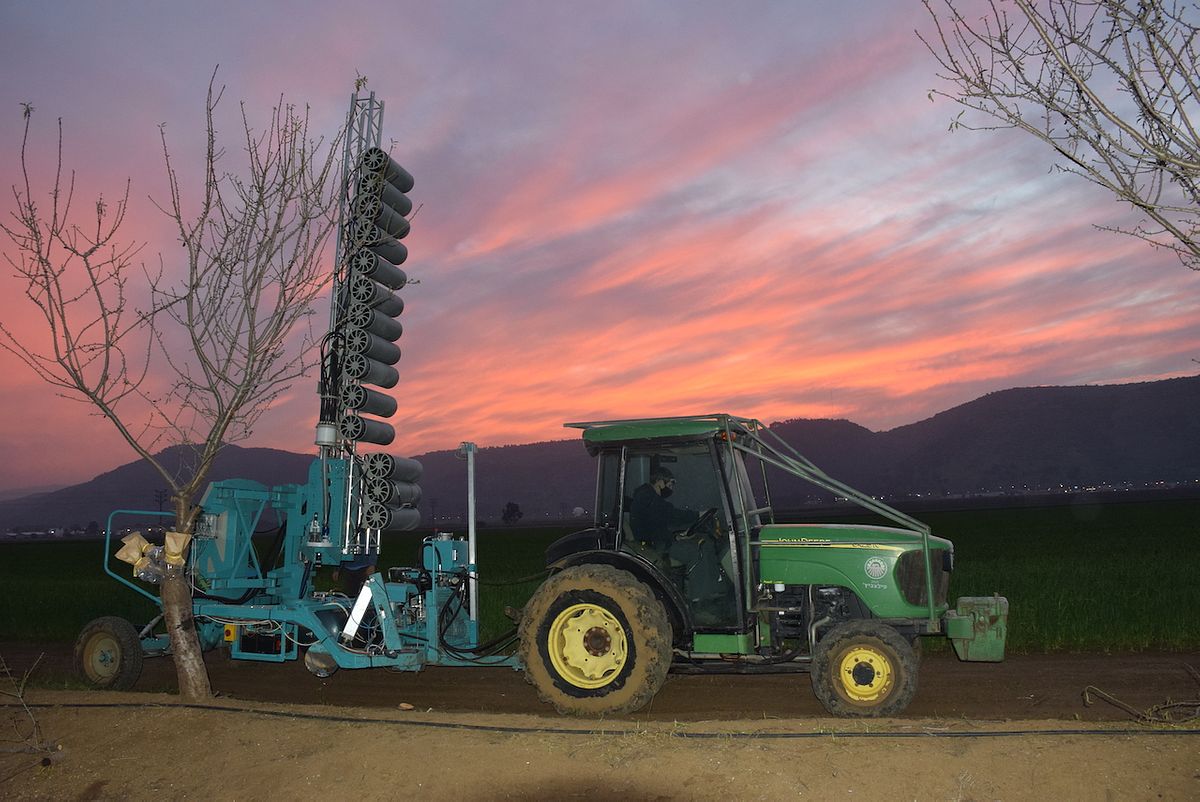 The numbers in the United States demonstrate the scale of the problem. You need roughly two beehives on each acre to achieve good pollination. Currently, the US has approximately 2.7 million beehives in total, Keren explains. Almonds alone account for 1.25 million acres of land. In other words, approximately 90% of the beehives in the country are driven to California every winter to pollinate the almonds, which can cause stress to the insects. “If one beehive has a disease, it spreads all over the beehives,” the VP adds. “Then they take the disease or virus back with them. It’s a real challenge for the growers now to get enough beehives to get good pollination. That’s why growers are looking for a solution.” It can also be extremely expensive to rent bees, a solution that is commonly used, but which can cost millions of dollars.

Finding a “Plan B” for global agriculture

Edete Precision Technologies got its start after one of its founders, a trained mechanical engineer, heard a lecture about the challenge of pollinating avocados in Israel. Eylam Ran was shocked to discover that so much of our food security and diversity relies on just one insect. While you can bring bees to an orchard, it’s impossible to control how they may behave. Add in current pressures, such as Colony Collapse Disorder, and the situation starts to look extremely precarious.

With a background in agriculture, Eylam decided to use his engineering expertise to come up with a “Plan B”. After six months of intensive research and reading as much literature as possible, Edete launched in 2016. Eylam and Keren established the company with two other founders, excited by the opportunity to do something with the potential to change the world. “It’s the first time in my life that I’m really feeling that I’m doing good for humanity,” she tells Invest for Good. “It’s not growing a business for shareholders. I’m doing something which can make humanity last longer.”

Their pioneering solution isn’t universally popular, however. There are some critics who point out that we wouldn’t need artificial pollination if we instead focused our efforts on conservation. The founders of Edete don’t dispute that we need to do everything we can to help restore balance to nature, through fighting climate change, making farms more ecologically diverse, investing in going greener, or rethinking our destructive habits, such as spraying pesticides on crops.

However, Keren argues it won’t be enough and that mechanical intervention will still be necessary. Describing it as simply replacing the postman, the VP insists that none of it has any impact on the insects or animals.

“On the contrary, we know that if you use our solution with some insects, it creates even better results than what we can achieve by mechanical pollination alone.”

Working in tandem with bees, artificial pollination can increase yields by up to 20%, the company estimates. 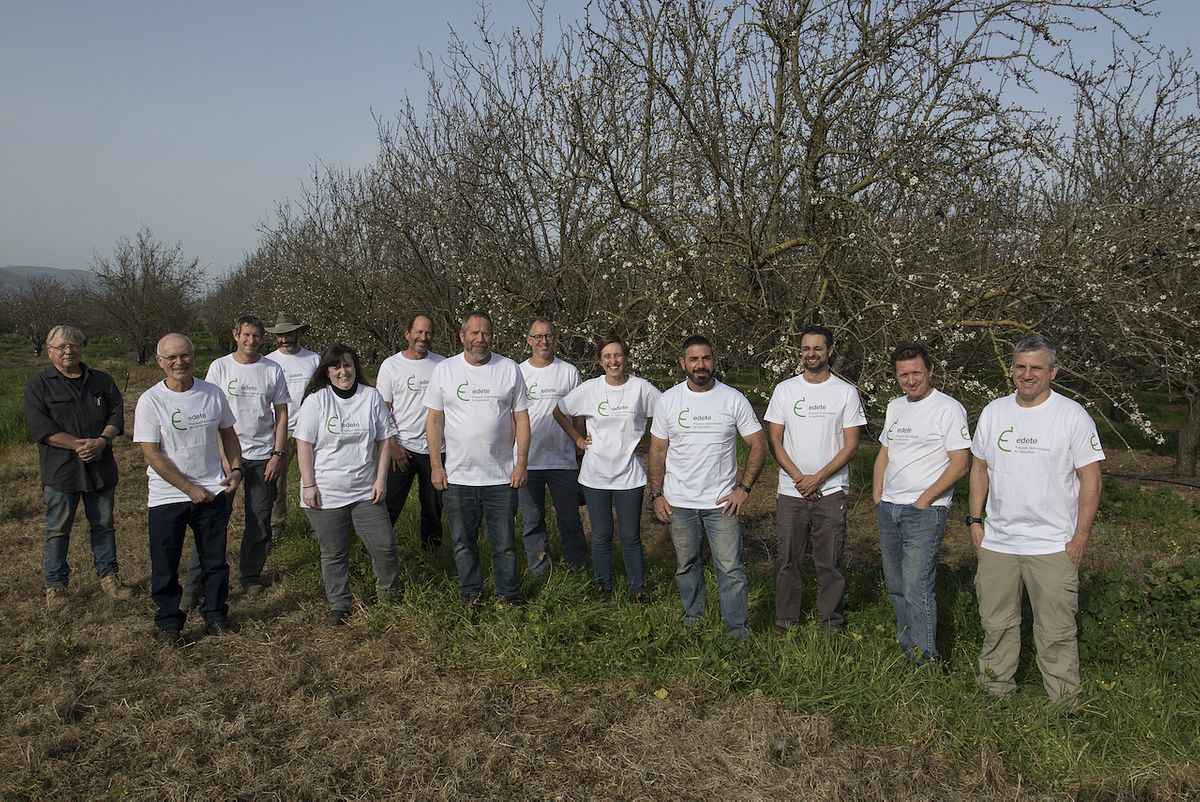 The explanation for this is cross-pollination, a process by which one plant pollinates a plant of a different variety. It happens naturally when bees travel from one flower to another in an orchard, leading to genetic diversification. Some plants can self-pollinate but many, including most of the food we eat, need to be cross-pollinated with pollen from different cultivars to produce a crop that’s healthy and mature.

Edete’s mechanical pollination brings the pollen from one type of flower to another, enabling cross-pollination. Specially equipped vehicles blow out the pollen as they drive down orchard rows, using an electrostatic charge to keep the individual grains from sticking together. The vehicles employ lidar sensors - a type of laser technology - for precision. One of the company’s mechanical pollinators, driven at six kilometers per hour, can pollinate over 1000 acres per season, which typically last three to four weeks.

By contrast, some provinces in China are now pollinating their crops by hand, a process that is time consuming and inefficient. The country has also been importing European honey bees since the 19th century, leading to a steep decline in the indigenous Chinese bee population. “In China, most of the young people are moving into cities and it’s mainly the old people who remain in the villages where they grow pears, apples, prunes and apricots,” Keren says. “The old find it much more difficult to pollinate each and every flower in every tree.” In Korea, the co-founder adds, they hand pollinate pears, in Israel they are doing the same for pitaya, while all the vanilla from Madagascar needs to be hand pollinated too.

As a result of this, it’s not surprising to hear that Edete has some competitors looking to come up with their own creative solution to dwindling pollinators. Some of these can have the ring of science fiction. In Japan, for example, they have tested the idea of using soap bubbles to pollinate pear trees. When fired from a bubble gun, the researchers were able to achieve a success rate of 95%. They are now looking to see whether they might be able to achieve the same results by using drones to fire the bubbles.

Another method is to use robotic, bee-like chemical drones to pollinate crops from the sky. There are variations of this technology being tested in different parts of the world, from the UK and the Netherlands to the United States. Like Edete’s method, many see the drones as something that could supplement what bees do naturally, not replace them entirely.

Investing in the future

Raising investment for what is very new and untested technology can be difficult. In Edete’s case, they were able to secure pre-seed capital through a group of well-known investors in the country. That group has invested two more times, proving that they are convinced of the company’s product and leadership. Edete has also secured investment from four kibbutzim, a collective community traditionally based around agriculture. As the company looks to scale, they are now seeking corporate investment.

Keren predicts that Edete Precision Technologies will eventually become a “significant player” in pollen production and the process of storing it as a pollen bank. The company can already produce the pollen a year in advance and store it for up to two years without affecting its viability or germinability, the degree to which a seed can germinate. “By doing this,” she says,  “I believe we will also be able to supply the pollen to other companies.” 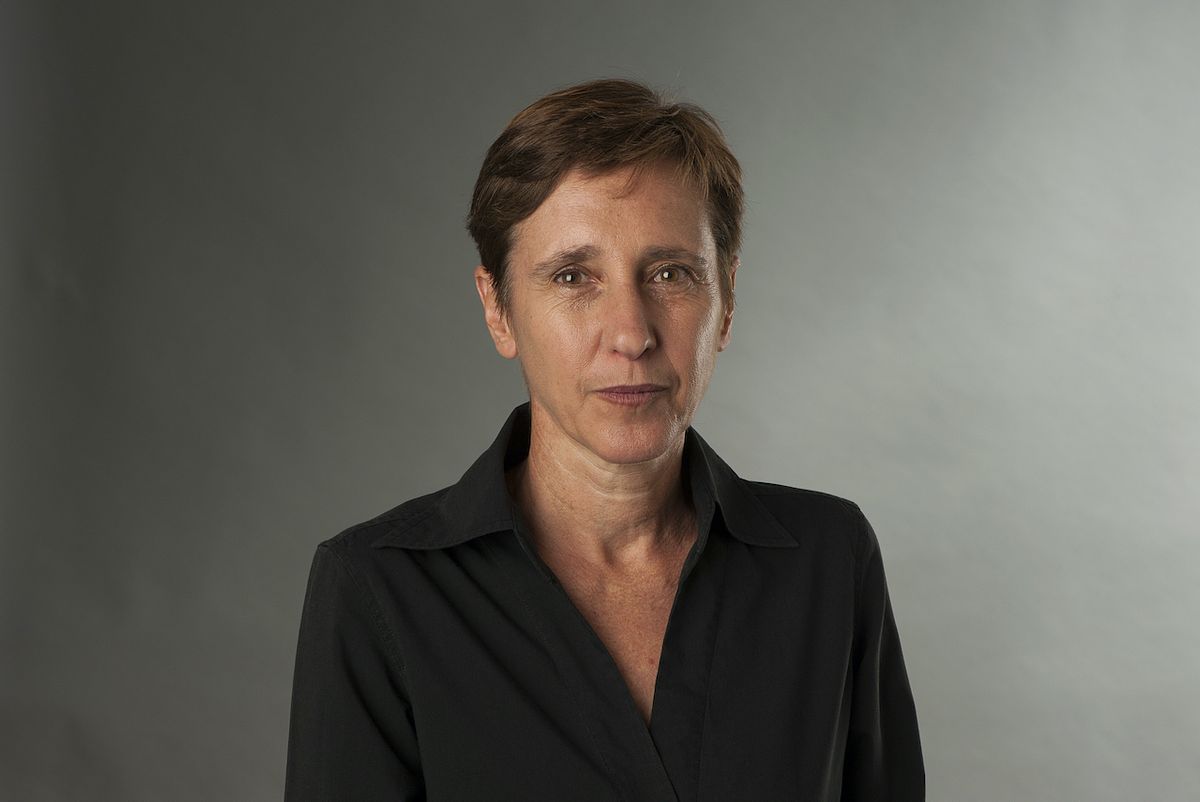 For the VP and founder, finding a solution to the pollination challenge is somewhat personal. Her grandfather was one of the first avocado growers in the country, but the fruit is not native to Israel. She watched as he grappled with the problem in his own orchard, where the family also grew oranges, grapefruits and other citrus fruits. For that reason, she feels a special connection with Edete’s goal. In the future, she believes the technology will help pollinate avocados in Israel, but it’s more challenging because the avocado flower opens for two to six hours as a male and then opens again as a female.

Human beings may still not be able to keep up with nature’s incredible diversity and innovation, but we are getting closer to coming up with technology that could help us prevent a frightening future. As Keren reiterates, we really do need a plan B for global agriculture before our pollinator numbers dwindle even further.

Keren Mimran is the co-founder and vice president of Edete Precision Technologies, a company working to solve our world’s growing pollination challenge.