Our financial system needs to become more sustainable and less exploitative, argues Rehana Nathoo, the founder of a consultancy that is tackling some of the issues related to simply accepting the status quo.

Recognising that the planet can be a better place for everyone is part of the work of impact investors. Instead of channeling money into businesses that exploit limited resources, they look to fund the people who are working towards solutions to pressing global problems. Take that one step further and you’re into “systems change”, a means of improving the very systems that created those problems in the first place. 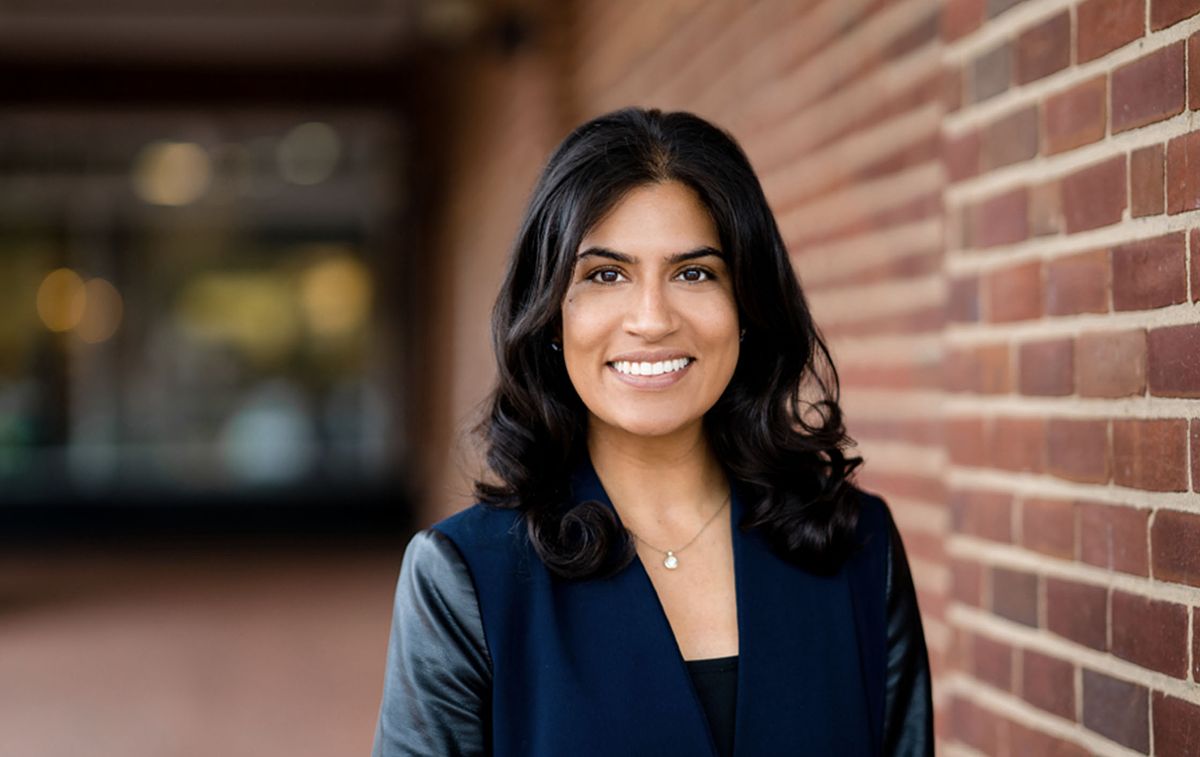 Rehana Nathoo, the founder and CEO of Spectrum Impact, is motivated precisely by tackling broken and misaligned systems. It’s her aim to convince others, whether allies or naysayers, that the status quo needs to change if we’re going to make progress. “The shift to a more long-term, sustainable system is going to create some outsized returns - both financial and social - for all of the players within the economic system,” she predicts.

But how easy is it to change a system that has been ticking along for maybe 100 years, producing some clear and powerful winners? As a self-proclaimed problem solver, Rehana is up for the challenge and started her consultancy to help others broaden their impact-investing footprint.

Spectrum Impact is only two years old and already it has worked with clients that have the potential to drive transformation, with reverberations beyond the financial industry. One of these is the Equality Fund, a collaboration led by the Canadian government to scale and transform systems for gender equality. With a commitment to gender-lens investing already in place, Spectrum Impact’s job is to help them execute a workable investment strategy that will maximise results in the long term.

We provide strategy support and we basically create a road map for our clients: ‘Okay, so you want to do impact investing but you have no idea how. No problem, let’s come together and figure out the how.'

Rehana compares what she does to building a house but without worrying about the furniture or the decoration. “We provide strategy support and we basically create a road map for our clients: ‘Okay, so you want to do impact investing but you have no idea how. No problem, let’s come together and figure out the how.'"

After that, there will be a period of about three to four months when she’ll dig in and customise what that looks like. For every client, that customisation is different, with a unique set of problems that needs solving. Some of the consulting work might include training and advising others, as well as locating gaps in knowledge that could be addressed through thought leadership.

The clients generally fall into two camps, she tells Invest for Good. There are revenue-generating investment funds backed by one major entity or group, such as a family foundation or a nonprofit. On the other side, Spectrum works with large, for-profit companies, from corporations to social enterprises.

Their motivations for getting into impact investing differ as well. Some will be looking to impact investing to generate profit by attracting new clients, with altruism less of a factor. Others will recognise that they might need to rethink sustainability in relation to their business. They’ll be looking to bring their employees on board, to make them stakeholders in the company and proud of where they work. These companies will be more likely to think of their supply chain and instituting fairness all the way down the line. “I would say that we welcome both with open arms,” says Rehana. “Whatever it takes to just sort of dig in there and try to get to the right goal.”

With approximately 12 clients in the mix, many of them coming from referral, Rehana’s fears that the company wouldn’t get off the ground didn’t come to fruition. Seemingly self-assured and accomplished, she explains that even she was plagued by imposter syndrome: “Probably like a lot of female entrepreneurs, I thought it would take less than 30 days for the business to crash and for nobody to want to hire my services or pay the fees that we charge.”

On fees, she was told early on to charge what she’s worth, one of the best pieces of advice she’s had. There’s a desire to start low, she notes, so that people will want to hire you, but the danger is that a client will then not value your true worth. “So either they actually think that they were overcharged or you feel like you gave them too much.” Both scenarios can breed resentment.

Originally from Canada, Rehana wanted to become a lawyer before changing her mind after going to Bolivia and working for a local energy NGO, an experience she calls “life-changing”. She switched to an international relations major and came to the United States for graduate school in New Jersey, a stone's throw from New York - a city she fell in love with. Not long afterwards, she landed a job at The Rockefeller Foundation to manage the grant-making portfolio.

It was a steep learning curve in which she was immersed in impact investing day and night. Over the course of her time there, she discovered that she was most intrigued by systems change work. Rehana then leapt over to the Bank of New York Mellon to work on social finance, before moving to Washington D.C. to join the Case Foundation in 2016, an organisation that invests in people and ideas that can change the world.

Her move to Case came at a time of seismic political changes in the United States which forced organisations to pivot and respond to new challenges; some struggled. As a Canadian, there were moments when she thought about heading home. At the same time, Rehana had a gnawing feeling that she should use this opportunity to strike out on her own: “I would go to sleep and think about it, and I think I just decided that if I don’t do this now, I might never do it.”

As someone who had always been anchored by a secure job, it was a bit of a gamble. However, she credits “thoughtful mentorship” for pointing out that the risks were mostly a matter of perspective. With no children, no debt and a skillset that could land her a job if she wanted one, it wasn’t going to be disastrous if it didn’t work out. After two years, she can say that the best part of having her own consultancy is that it’s impossible to get bored: “Every three or four months you have a new project and you’re always learning something, because this field is so vast.”

I would go to sleep and think about it, and I think I just decided that if I don’t do this now, I might never do it.

On a more personal note, the founder has learned to work only with clients that are a good fit, even if that means turning down money. Past experience has taught her that if she chooses the wrong clients - or the wrong types of clients come to her - they’ll ultimately be less motivated to stick with impact investing. Their disenfranchisement can result in losing significant assets that could have been deployed to a particular problem. For Rehana, there’s a sense of personal responsibility, too, not just in doing her absolute best for the right clients but in being the leader of a small team.

Two former colleagues from the Case Foundation have followed her to Spectrum Impact and it’s prompted Rehana to think seriously about leadership. She admits to trying to figure out what kind of leader she wants to be every single day, a development that has surprised her. Before starting Spectrum Impact, she thought it would be the day-to-day running of the business that would pose the biggest challenge.

One unforeseen challenge is Covid-19. Some of Spectrum Impact’s clients are found through impact investing conferences that have been cancelled. However, Rehana believes herself to be luckier than her brick-and-mortar peers, singling out restaurants that might not reopen. “It’s such an optimistic thing to say but that perspective, I think, has been hugely helpful for me, because it’s really difficult to feel quite sorry for ourselves when we know the cyclicality of our business will continue.”

It’s entirely possible that people will tighten their belts, but she hopes that in the longer term more people will reflect on what it means to be resilient in the face of worldwide fragility. Investing in scarce resources that break the planet, for instance, might take on a new pallor as we come out of Covid-19.

With impact investing seeking robust, sustainable solutions to systemic risks, it could see a further boost from organisations that come to believe it is their calling. “At the end of the day,” she says, “if we act globally the way we think we’re supposed to, there will be increased demand for organisations figuring out a way to build impact investing programmes quickly, because that’s where resiliency lives. So a little bit of 2020 is going to be tough, but we’re optimistic that 2021 is going to be a little better.”

Rehana has an optimistic outlook in general. When she wakes up in the morning, it’s with the conviction that it is possible to positively change the financial system, one of the most traditionally held systems of our age, even if it doesn’t happen in her lifetime. “I actually think that we can change it and we can probably change it to a version where mutual benefit is a key principle.”

Rehana restores a bit of work-life balance by enjoying the great outdoors. Currently living outside Lansing, Michigan, with her partner, she’s in a good place for being able to go hiking or running in beautiful, countryside scenery. It has been a salvation through lockdown, she says.

The period of confinement also has allowed her to indulge another of her hobbies, reading. She loves fiction and really enjoyed Where the Crawdads Sing, a coming-of-age story set in the North Carolina marshlands. She also recommends Sapiens, a book that is particularly relevant for current times. “There’s nothing more sobering than realising how inconsequential humanity is. I found it very cathartic. It’s like, ‘Great, yes, we’re going to be fine. We just got here.’”

Rehana Nathoo is the founder and CEO of Spectrum Impact. She’s also a guest contributor to Impact Alpha and an adjunct faculty member at Georgetown University’s Global Human Development Program.