Paying for results rather than activities has the potential to revolutionise philanthropic work.

There are over 700 million people living in extreme poverty today, a number that is staggeringly high. Many organisations at the frontline of ending poverty in developing countries rely on a mixture of donations and grants which provide short-term solutions. In the long term, however, the cycle of poverty is not broken. Instead of helping people become self-reliant, much of the money effectively acts as a handout that creates dependency.

Village Enterprise, a nonprofit with the aim of ending extreme poverty in rural Africa, is testing an innovative approach that could revolutionise poverty alleviation. It’s championing results-based funding, a model in which organisations aren’t paid for their daily activities but for the results they are able to achieve. Dianne Calvi, the CEO and president of Village Enterprise, calls it a “major step forward”.

The nonprofit recently became the first to implement a development impact bond for poverty alleviation. The $5m pilot attracted working capital from investors; these are effectively pre-financiers who supercharge a poverty reduction programme. If targets are reached or exceeded, outcome payers - the likes of stakeholders and government agencies - will pay back the original investment plus a financial return.

Think of it as impact investment redesigned for international development - and it has the potential to scale.

“If we want to end extreme poverty we have to come up with innovative ways of increasing the amount of funding for poverty alleviation and the impact of programmes,” the CEO argues. That’s why we embarked on this pilot. If we can show that the programming is actually achieving results, we’ll be able to bring in new types of funders.” 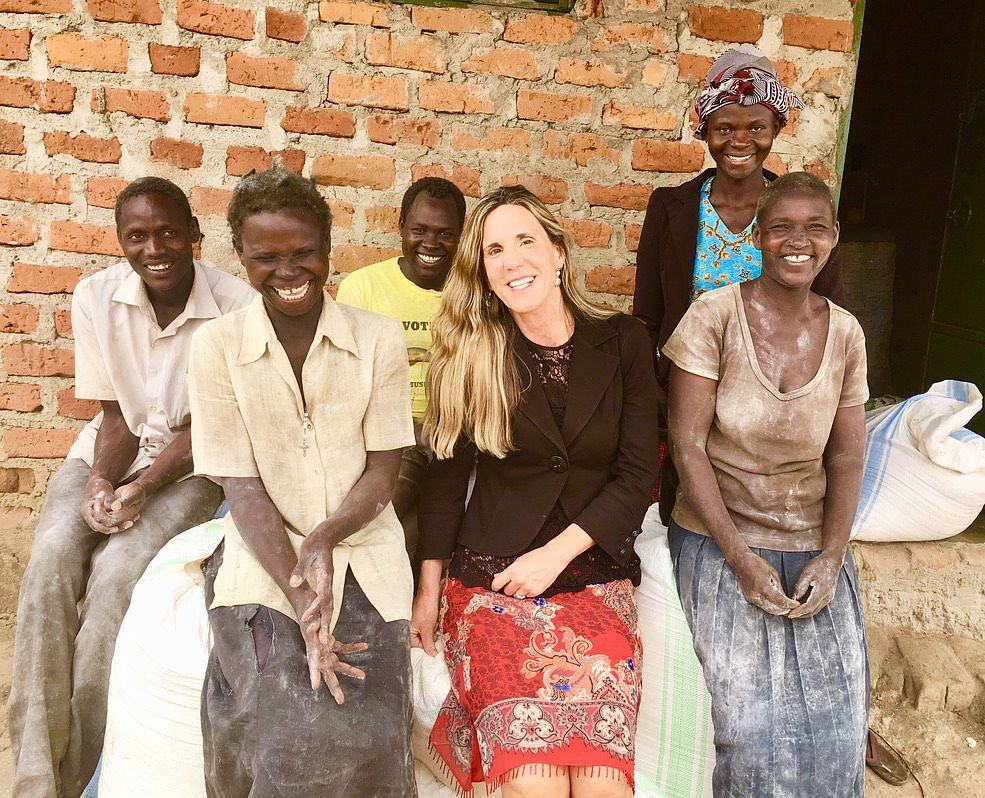 Village Enterprise is in the business of poverty graduation, a programme that breaks the pernicious cycle of poverty. The organisation works with people subsisting on less than $1.90 a day and equips them to start their own sustainable businesses and savings groups, lifting whole families out of destitution. To date, nearly 60,000 businesses have been started and over 200,000 first-time entrepreneurs trained - all of them living in rural Africa.

The impact bond has helped to transform the organisation’s efforts, as well as accelerated the takeup of digital technology. While the final results are under wraps until February, Dianne says they’re exciting. It’s important to note that these results are independently evaluated with a randomized controlled trial. This guarantees that Village Enterprise is not cherry-picking certain metrics to inflate its impact. It makes it even more attractive to donors and investors, as they can be assured that their money is funding a programme that is producing positive results.

“I’m feeling pretty confident that we can scale this pilot up and potentially change the ways these kinds of programmes are funded,” Dianne tells me from her base in California. The plan is to eventually turn the pilot into an outcome fund with a range of investors who could make a substantial difference. It could also become a template for other nonprofits. Take note if you’re working in a similar field. 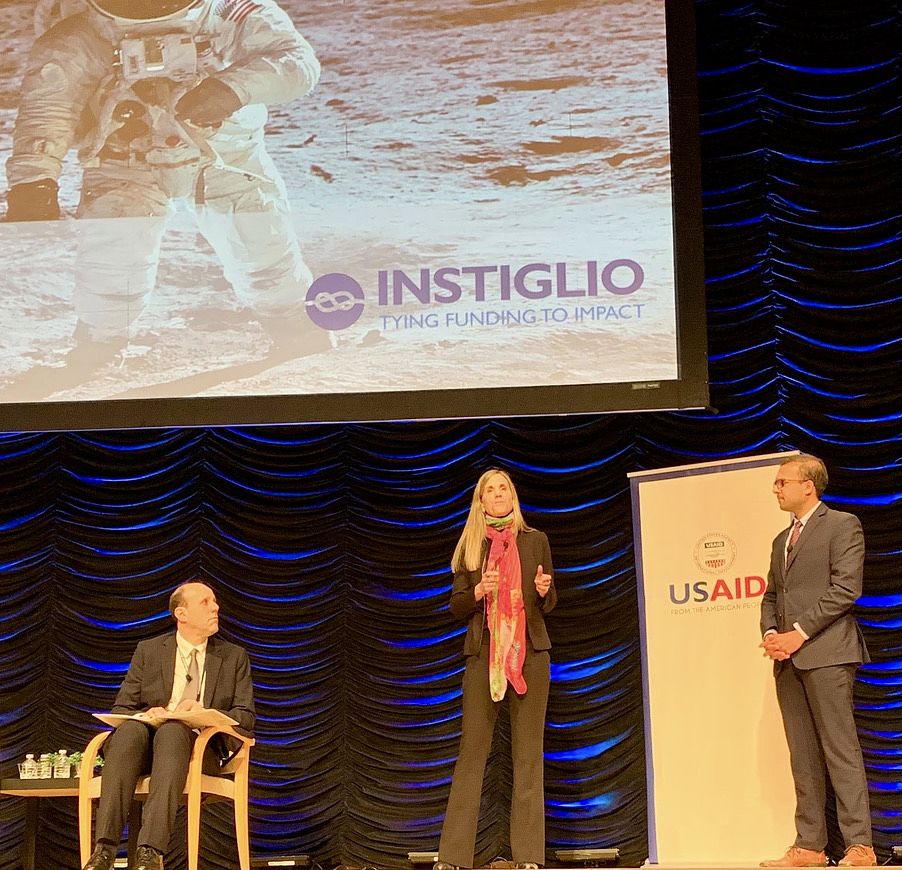 The power in partnerships

Bringing more people on board and widening the pool of partners engaged in Village Enterprise’s mission is critical for its success. One of its partnerships is with the Kenyan government, in a project funded by the World Bank. Currently, the government provides cash transfers to very poor people but the hope is that these cash transfers could help fund income-generating activities, using the Village Enterprise poverty graduation programme.

This allows Village Enterprise to really scale up its work. “If the Kenyan government adopts this kind of programming as part of their social protection, we could go from reaching tens of thousands first-time entrepreneurs to reaching millions in a pretty short timeframe,” predicts Dianne.

Partnerships not only increase reach, it allows the nonprofit to have a presence in regions where it doesn’t operate. When a powerful cyclone hit Mozambique in 2021, Village Enterprise trained World Vision employees to deliver its programme as a way of helping the survivors. In a relatively short period of time, 800 businesses were created and they trained 2,400 entrepreneurs. One of the reasons they could do that so quickly, Dianne explains, is because they had a partner on the ground.

Returning to Kenya, Village Enterprise is working with Catholic Relief Services to support the end of child malnutrition. “We’re not a health-oriented organisation, we’re in economic development,” the CEO points out, “but working with other organisations can have a positive impact on health outcomes as well.” Meanwhile, one of its longest partnerships is with the Wildlife Conservation Society, to reduce poaching and deforestation by helping those living near conservation areas to embark on sustainable livelihoods.

As 2022 gets under way, Village Enterprise continues to build on its reputation of being innovative. One of its newest projects recently won an impact award for its unique solution to the refugee crisis, crowding in close to $20m from the likes of the IKEA Foundation, the Conrad B. Hilton Foundation, the Sea Grape Foundation and some private donors.

DREAMS brings together Village Enterprise with Mercy Corps, a humanitarian-aid NGO. While the former is focused on poverty graduation, the latter is a specialist in helping build resilient markets. By pooling their expertise and skills, they are hoping to help refugees in Uganda and Ethiopia - where 10% of the world’s refugees live - become less dependent on food aid and humanitarian assistance.

It’s an approach which Dianne feels has huge potential and is much needed. In the past year, there have been deep cuts to food aid in East Africa. Like with the impact bond, the CEO would be looking to bring in stakeholders to invest, such as the World Food Programme and the UN Refugee Agency.

“I believe we can change the way we fund refugee work and really focus on an approach of self-reliance rather than long-term food assistance.”

The United Nations Refugee Agency estimates that 82 million people have been forced from their homes. Many of them will end up in refugee camps for many years; in some cases it can be over a decade. In all that time, the refugees are completely dependent on food and humanitarian aid. If that cycle can be broken by giving them the means to support themselves, then it can completely turn their lives around. 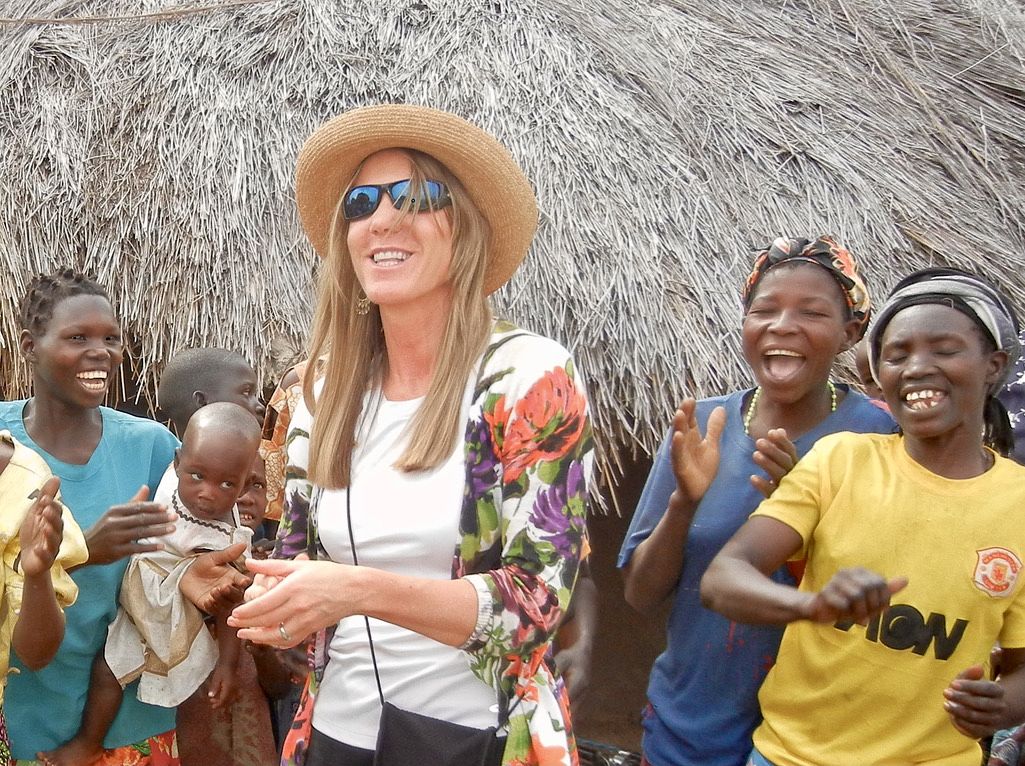 A model of empowerment

Dianne has herself seen how empowerment can give people hope. In one of her last visits to the field, she visited the Bidi-Bidi refugee camp in Northern Uganda. There, she met Salome, a woman who had walked with her seven children from South Sudan, a journey of approximately 300 miles. Salome had carried her youngest child on her back, not knowing if her husband was alive or dead.

When she arrived at the refugee camp she was given a bag of rice, some oil and a jerry can for water. Salome was also given some training and mentoring with Village Enterprise, enabling her to start a butchering business with two other refugees. When Dianne met her, the business was thriving.

Salome explained that she was hoping to one day return to South Sudan with her newly developed skills, a foundation she would have forever. “That gives her hope for the future and hope for her kids,” observes Dianne.

“We’re giving them the skills, knowledge, confidence and opportunity to do something they’ve never done before.”

Women like Salome are the change agents of their communities and are more likely to invest in their families. In fact, Village Enterprise’s data has proven that businesses run by women have greater income and assets than those run by men. Moreover, one of the nonprofit’s goals is to increase gender equity in rural Africa, a reason why over 80% of its entrepreneurs are women.

A key part of Village Enterprise’s model is the training and mentoring of entrepreneurs. Although Dianne is based in the United States, Village Enterprise is at its core an African organisation with most of its employees based on the continent. When they enter a new community, Village Enterprise African leaders host village openings as a way of introduction.

To implement the poverty graduation programme, Village Enterprise recruits full-time mentors from the local communities. Some of them have advanced degrees and most have experience of running their own businesses. The mentors support entrepreneurs for an entire year, using a combination of digital tools and in-person interaction to provide the training and mentoring.

The impact is significant: the lifetime income of participants is 300% higher than the cost it takes to generate that income. To put it another way, for every $1 invested, the entrepreneurs generate $3. Even with the disruption of Covid-19, the average Village Enterprise entrepreneur was still saving $43 over the course of one year. Dianne says that both incomes and savings increased despite the challenges of operating businesses during the pandemic. 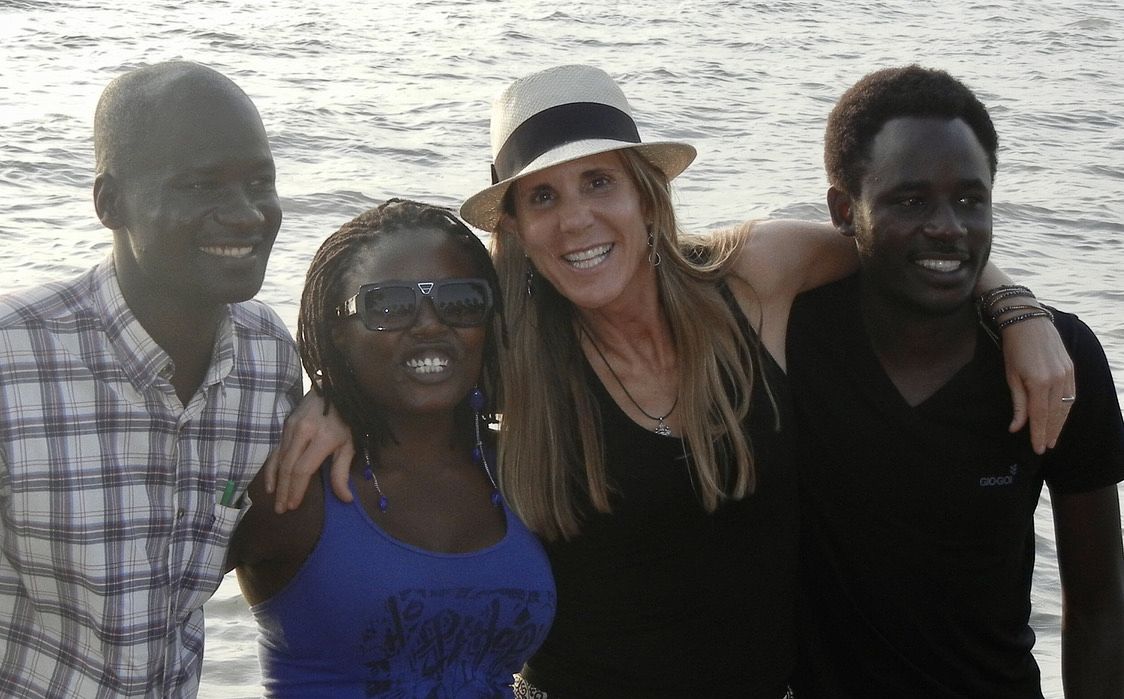 For Dianne, a key part of leading Village Enterprise is using innovation to drive change. Before joining the nonprofit as president and CEO, she was asked to join a board that worked with the homeless in the San Francisco Bay Area. Witnessing the transformative impact of that organisation convinced her to leave behind a career in management consulting and the private sector to focus on helping the most vulnerable.

She joined Village Enterprise because she fell in love with the model of helping people become self-reliant. In her 11 years at the helm, Dianne has grown the company from 13 employees to over 300, almost all of them African.

Today’s biggest opportunity, and one of the biggest challenges, is increasing the funding available to the organisation and others like it. “I think that oftentimes it isn’t clear when large aid projects are deployed, whether or not they’ve actually achieved their intended results,” Dianne tells me. This lack of evidence can hold people back from deploying capital. That’s why she’s excited by results-based funding as a way of motivating a larger array of impact actors.

The leader says that people often ask her, what can they do to help? Dianne likes to tell them to be the change they want to see in the world, a phrase that often comes up in conversation in Invest for Good.

“Each individual has a personal conviction. For me, I love this approach and I’m really committed to ending extreme poverty in rural Africa. I believe it’s possible and so I’m trying to be the change that I want to see in the world.”

What I really like about Village Enterprise is that it’s helping create a self-sustaining economy, by enabling people to start sustainable businesses. This approach shifts the traditional philanthropic model from one that can create dependency to one of empowerment. 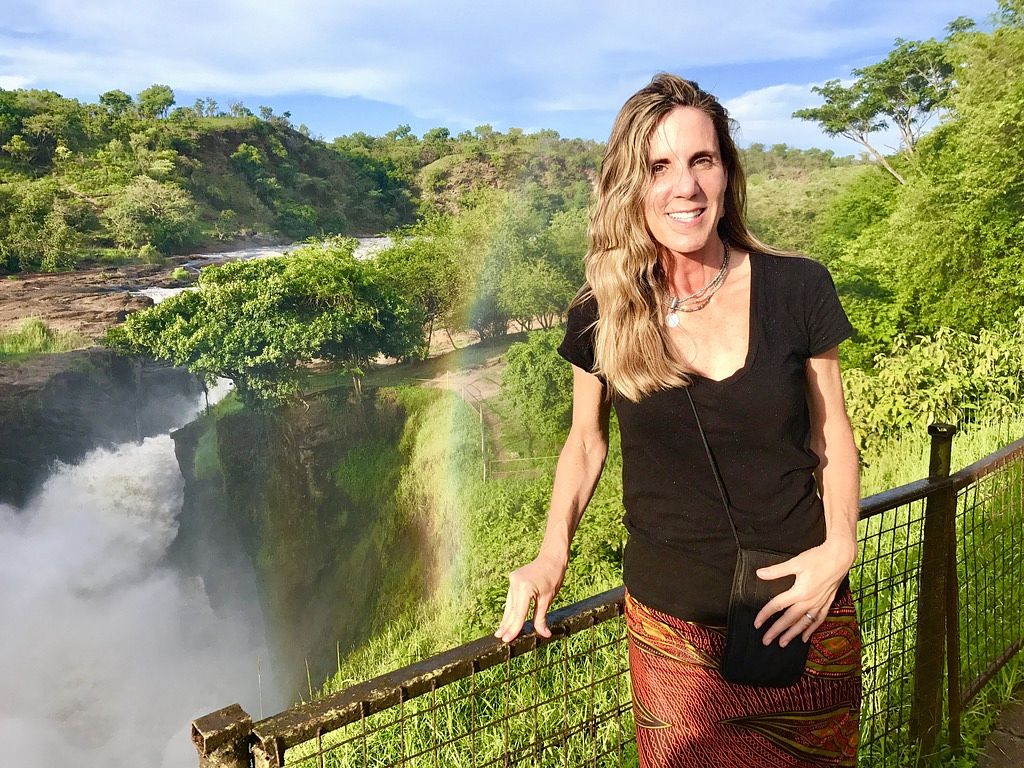 Dianne Calvi is the CEO and president of Village Enterprise, a nonprofit working to end extreme poverty in rural Africa.