Plotting a New Future through Planting

Do we need to rethink what the future looks like? Pam Warhurst, the co-founder of Incredible Edible thinks so.

Pam Warhurst is not interested in being patted on the back and being told she is doing a good job. She’s interested in taking action. More specifically, changing the rules so that they benefit a wider cross-section of society. For too long, she argues, ordinary people have often felt powerless in the face of problems that have ripped apart the fabric of their communities and created growing inequalities. Her solution is to empower people to grow their own food in public spaces, turning inaction into purpose and allowing them to imagine a brighter future.

Radical? Pam doesn’t think so. More like pragmatic, she reasons, because her vision will also promote resilient communities as we confront the effects of climate change. “It’s about putting the wind under people’s wings. We might just get a sense of purpose around the public realm by helping citizens make decisions about what should go where and what they want out of it and whether businesses should flourish as a result of it.” 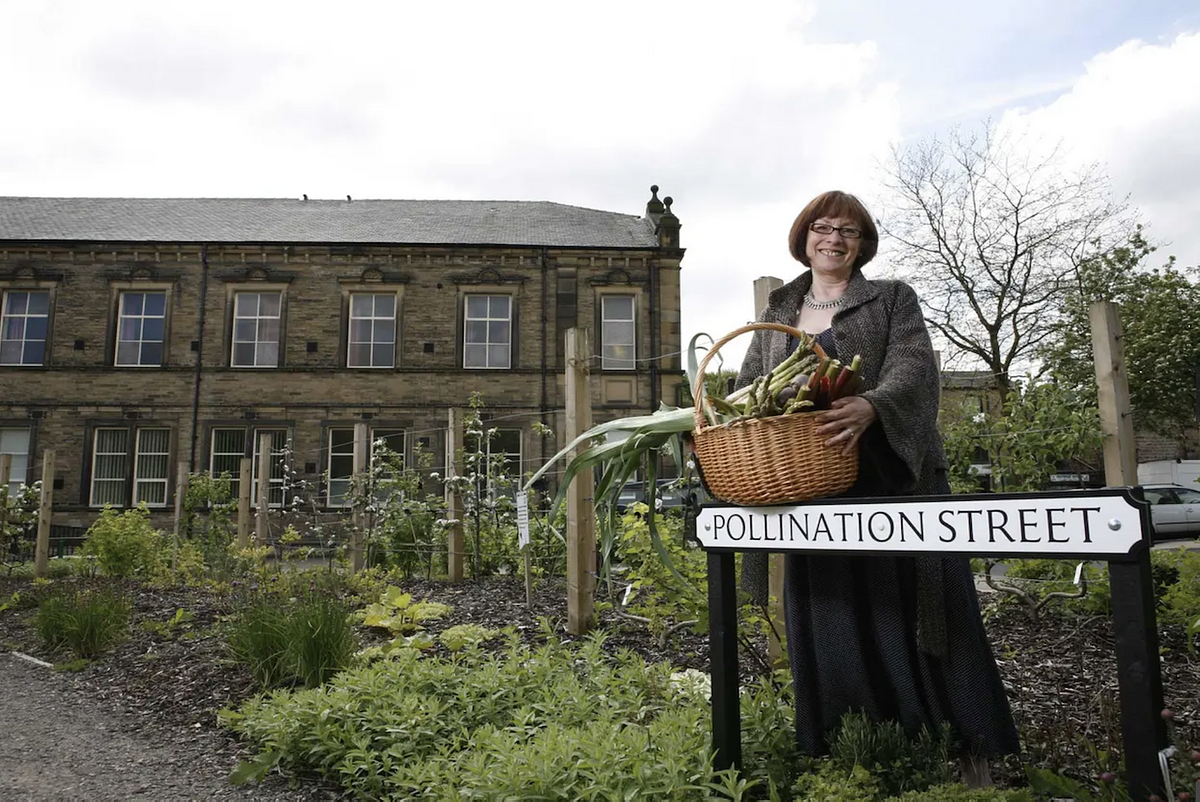 These aren’t just whimsical ideas based on hopeful optimism. Incredible Edible, the network Pam co-founded in 2008, has proved that investing in citizen self-belief can have extraordinary results. Back then, doom stories about climate change and biodiversity loss had left Pam dispirited. Everything pointed to taking immediate action, but instead she only heard political wrangling and whingeing. What better way to start, she thought at the time, than with your own community and whatever is at your disposal?

Her community was Todmorden, an English market town that had once prospered during the Industrial Revolution with several large mills and a vibrant weaving industry. Like many industrial towns, it experienced economic decline in the 20th century as the mills shut and unemployment shot up. As jobs moved to cities and local government budgets shrank, pockets of neglect in community spaces grew.

Together with a group of friends, Pam suggested getting locals to plant vegetable and fruit gardens in these spaces. It became the starting point for Incredible Edible and its inclusive motto: if you eat you’re in. As the founder sees it, food is a simple concept everyone can rally around, making it easier to recruit people at the grassroots level and gain traction. Thirteen years later, Todmorden is still an example of how the act of planting food can revitalise neglected communities, giving people a sense of pride and connection to one another.

There are vegetable plots dotted throughout the town, whether it’s in front of the police station, the health centre or in the graveyard. There is always the possibility of getting involved in growing or simply taking some of the food for yourself. It’s all run by volunteers on little or no money and yet there is a strong sense of accountability with little of the bureaucracy.

Todmorden’s example spawned a huge network of Incredible Edible groups throughout the UK - more than 150 at last count - as well as international spinoffs in countries such as France, Australia, New Zealand and Japan. For years, Pam told this success story over and over again to anyone who would listen, inspiring others to take the idea and reinterpret it. 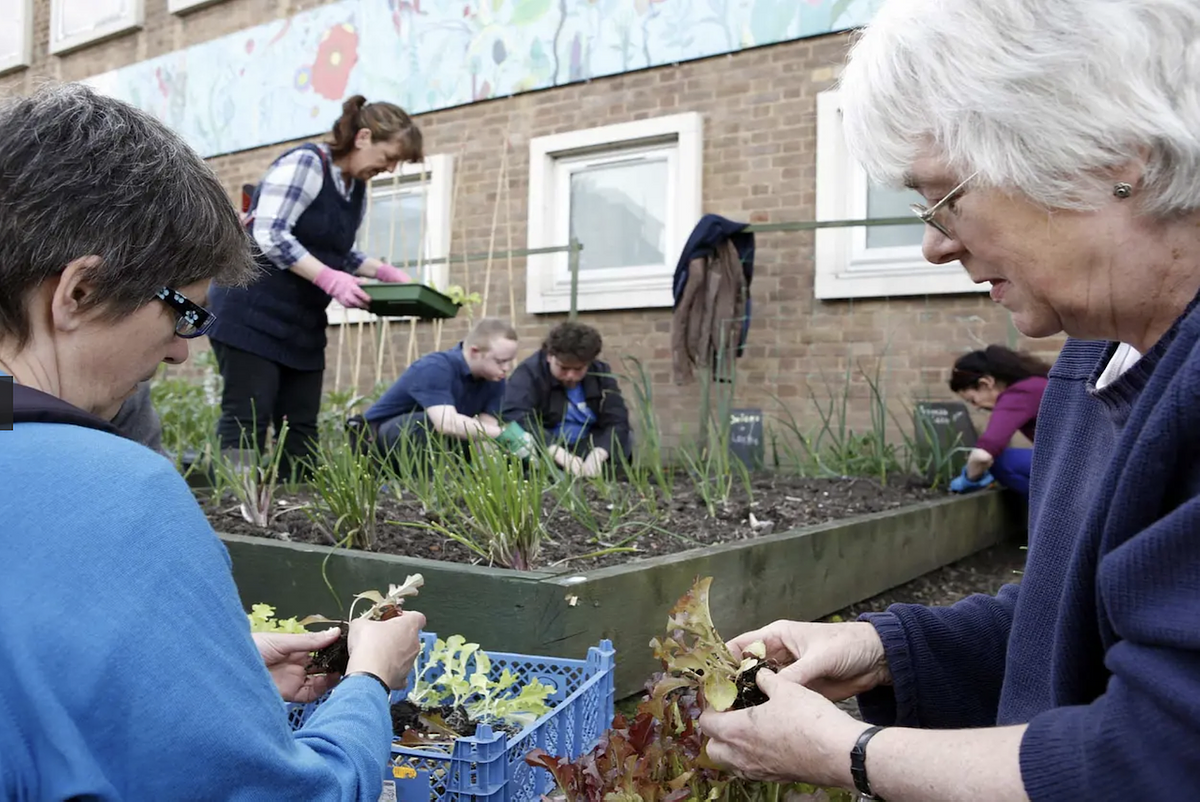 Today, she’s trying to answer the question of “so what?” The local leader is not prepared to sit on her laurels, pull up cabbages and ease into retirement. She’s equally determined to tackle some lazy preconceptions: “As a woman who’s held a lot of national positions all over the place, as soon as you start to talk about community, you get patted on the back as if you’re some second-rate citizen. ‘Bless her, oh, she’s talking about growing food in community spaces. Isn’t that sweet?’ Enough of that.”

Pam may have started with her local community, but she is now setting her sights on policy and big public institutions, the likes of hospitals and prisons, to bring about if not a full-scale revolution then systems change. She’s asking for others to join her in rethinking what the future looks like. “Who’s going to be brave enough to stand on the frontline? To help me demonstrate that with the land we’ve got in our towns, in our villages, in our boroughs, if we invest in our citizens’ ability to grow food, we’d actually find we have better health outcomes, better community development outcomes and better entrepreneurial outcomes.”

Incredible Edible, for instance, has created demand for food that is produced locally in smaller batches. Food entrepreneurs have capitalised on the concept, with everything from local beer to artisan cheese marketed to customers who want to spend their money in their communities and not on inferior, mass-produced versions. It’s what Pam calls “sticky money” and it creates a thriving local economy, underpinned by ideas that won’t damage the environment, like flying in food from other parts of the world.

Population health is also way up her agenda, a priority that has been given more urgency in light of COVID. The founder has reasonably observed that nutritious food leads to better health. So, she wants health centres and hospitals to come on board, if only to give over some of their common spaces to growing fresh food. A nearby doctor in the town of Halifax has already embraced the idea. When he heard Pam give a presentation that imagined how half-empty car parks could be used for planting, he got in touch. “Let’s just do it at my surgery,” he told her. So that’s what they did.

Just before COVID struck, she went 15 miles up the road to Halifax a few times. After only two meetings with locals, she had about 50 people interested and willing to help. They turned the car park into a growing place; they painted fences, put up an archway, and kids designed a type of flower clock that would open at different times of the day. They planted apple, pear and cherry trees and built raised beds for potatoes and other vegetables. She admits some things grew better than others but the point is that the car park is no longer a desolate, depressing slab of concrete.

There were even plans to start a community kitchen from the newly designed space, with people sharing recipes from different parts of the world, but it has been put on hold. Pam is optimistic that the kitchen will open as soon as there is some return to normality. She’d like to talk to more doctors about putting ‘health’ back into the health estate, and she’s even contacted church authorities about repurposing some of their land for the people. As she notes, if they’re not about nurturing the community, then what is their purpose? “Yes, it’s about plastic, yes, it’s about carbon miles but if you want to make an impact for your population, why don’t you turn your estate over for food?” 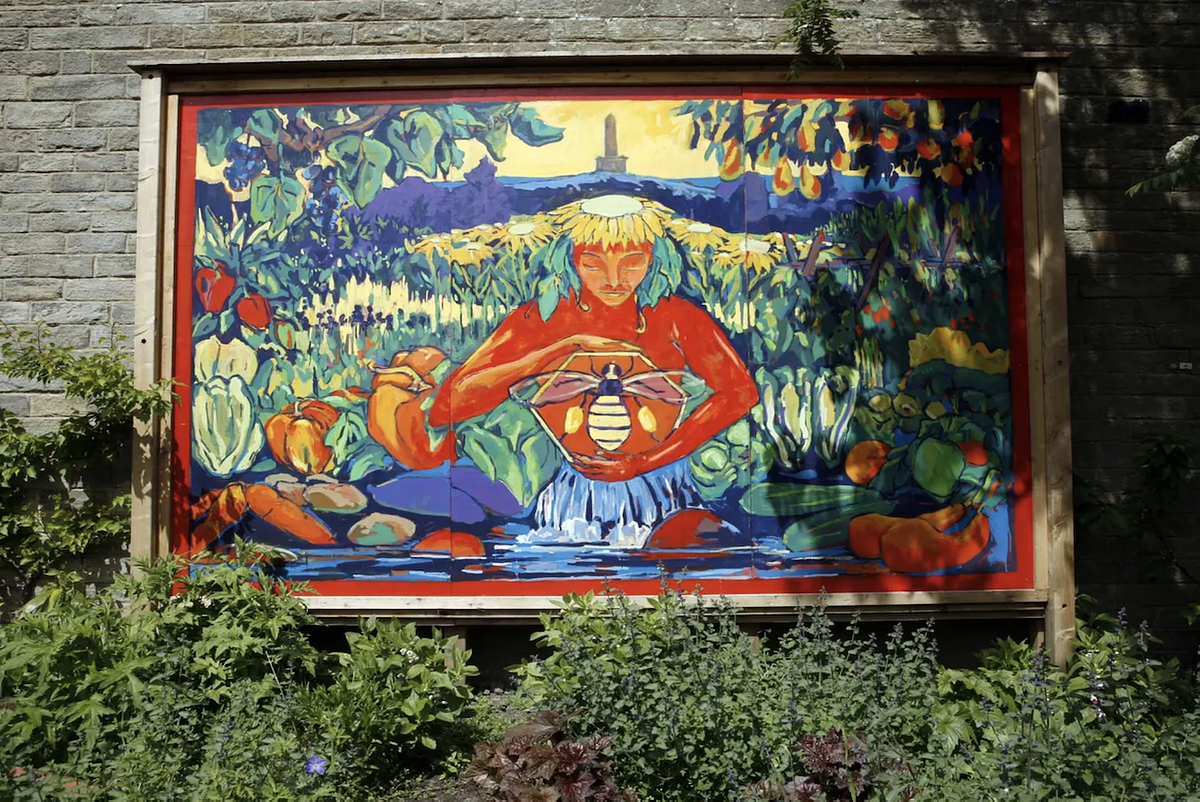 A practical, straight-talking person, Pam is reluctant to get bogged down in too many theories and strategy documents fixated on measuring impact with a financial set of metrics. As she points out, you can’t eat money. If the outcomes you are seeking are healthier people, healthier soil, reducing our carbon footprint, then she believes we need an alternative metric that ordinary folk can understand, one that you can take to investors and say, ‘Look what we’ve done. Respect it.’ After all, she adds, the impact of climate change will not be measured on a purely financial basis.

So far, Pam and her network have worked on a volunteer basis, with occasional pockets of money and some lottery funding for Incredible Edible that helped pay for the website and investing in some of the local groups. She is now actively looking for investment to prove that you can shift power to citizens and change the relationship between people and the state. “I can’t do this with fresh air,” she says. “I need to be able to have some folks who are on the top of their game, who can help me work with citizens, hand in hand, to demonstrate an alternative proposition.”

Like anything that brings about fundamental change, Pam does believe her proposals will require bravery. She didn’t ask the local government for permission to plant food in Todmorden when she started Incredible Edible all those years ago and there are some who would likely object, even if it’s just to exert power. “I’m not on a crusade for private land,” the activist points out. “I’m talking about public land and there’s a lot of it. We can use it not only to better the lives of people but to demonstrate an alternative proposition around engagement with citizens.” 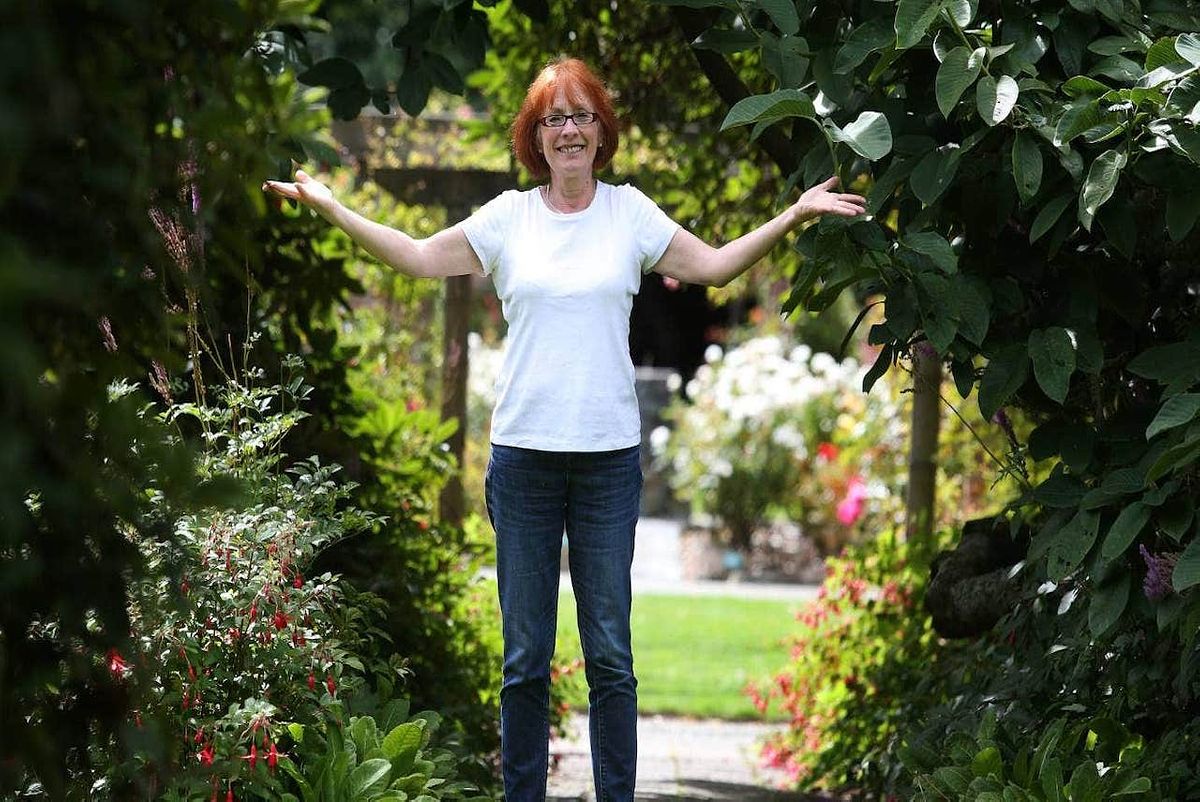 Pam is a whirlwind of energy, a passionate advocate of doing things differently. With her belief in the power of small actions, she’s transforming what is possible. That’s why COVID was such a blow. Like everyone, Pam has found it difficult to keep momentum but the Incredible Edible network has adapted. In Lambeth, a borough of London, they have brought together experts to lead Zoom sessions on a range of subjects that might interest their audience. The network has also bought seeds en masse and distributed them throughout the country, to continue planting if only in a socially distant way.

Meanwhile, Pam and her volunteers have been collecting stories when they send out the packets of seeds, asking for people to connect with them through social media or on the website. “There’s a whole host of things that have been going on that have had to be a poor substitute for some of that community activity,” the founder explains. “But nevertheless, it certainly hasn't died away with COVID and we’ve kept the stories going.”

If there’s a lesson to be learned from Incredible Edible’s own story it’s that no action is too small.

If you’re reading this and wondering what you might be able to do in your life or in your community, Pam says to just get started. Put one foot in front of the other and believe in yourself. Do whatever it takes to make it happen, she tells Invest for Good’s readers. For those with a resource to invest, she suggests looking at the Incredible Edible website. “I would say that, wouldn’t I?” she laughs.

It’s about moving the dial a little bit on how you see the world, she reflects. What seems like a ridiculously simple idea - planting food in public spaces - can shift the way we think about what good looks like. “I do feel quite positive because the old ways of doing things are just not going to work anymore.”

Pam Warhurst is co-founder of Incredible Edible and has been an activist and advisor for several decades. She is an Ashoka fellow and was previously the chair of the Forestry Commission GB.