Social entrepreneurs have big ideas that can do with investment and support. An ambitious online course is helping to keep their positive impact on track.

There is a commonly held view that business as usual is no longer going to cut it in a world where there are rising levels of inequality, a fragile planet and persistent problems such as homelessness, poverty and the threat of climate change. It is little surprise that social entrepreneurs are on the rise. With big, bold ideas to tackle injustices and global challenges, they are increasingly founding businesses that put social action above maximising profit.

While these entrepreneurs have extraordinary vision, they sometimes lack the access to funding and business nous that will enable them to scale up their ideas. Without the capital and the support, the desired impact can end up watered down. Helping entrepreneurs avoid this pitfall is a massive open online course called Accelerating Investment Readiness or AIR MOOC for short. The aim? To make connections between social entrepreneurs and the impact investors who are looking to use money to solve pressing 21st-century issues. 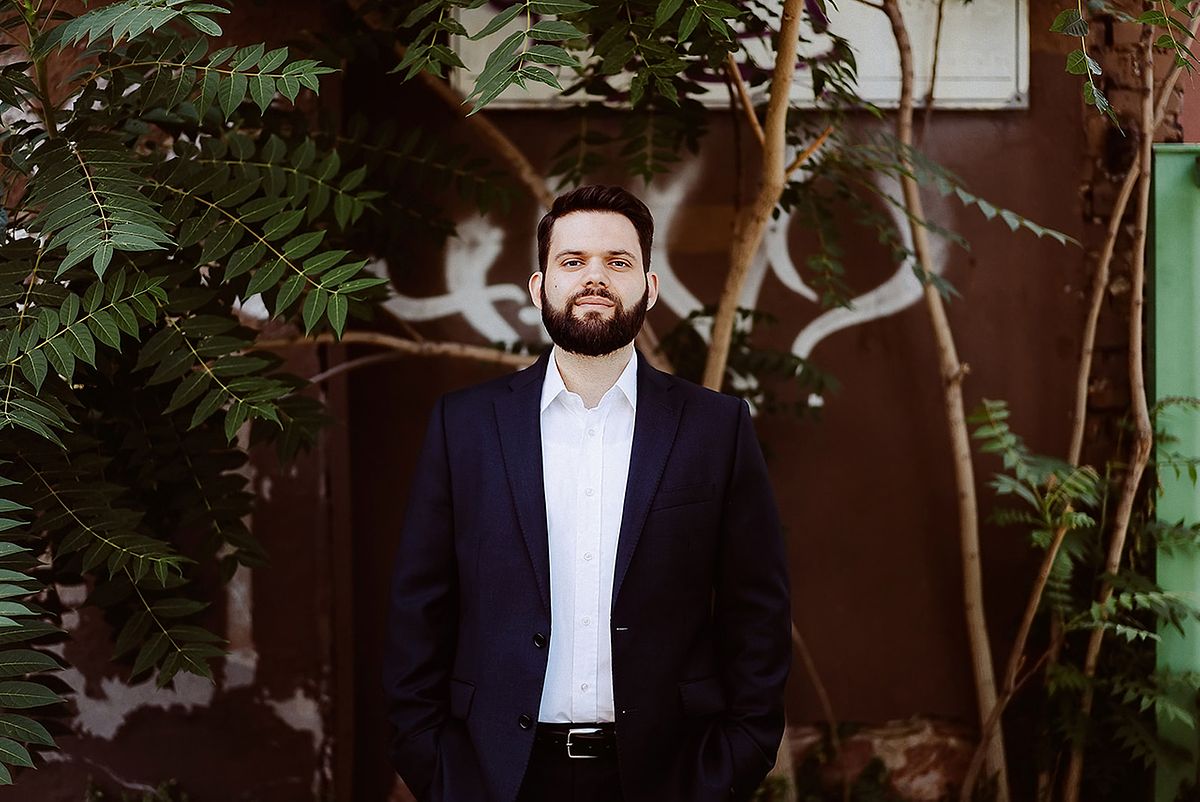 The course emerged from a bigger project called Finance4SocialChange, which has the aim of fostering social innovation in partnership with a consortium of organisations in Europe. Funded by the European Commission, AIR is free to access and is a mix of webinars and practical modules that harness the input of experts. Lead developer and project director Gorgi Krlev hopes to reach a wide base of people, to engage not just with impact investors and entrepreneurs, but policymakers, partners and mainstream companies not yet fully on board with social impact initiatives.

To drive up engagement, AIR hosted a competition looking for the most promising ideas that could propel positive social transformation and investor interest. There were about 250 applicants from different regions and, of those, four emerged as winners. One of these is Vollpension, an Austrian social enterprise with a unique way of solving the twin problems of old-age loneliness and poverty - problems that occur across countries, both rich and poor.

On the surface, Vollpension is a funky cafe in Vienna with the kind of furniture you might find in your grandmother’s house. There’s an old-fashioned kitchen with decorative bone china plates, a style that clashes with the exposed brick walls and airy space. It has the air of both the old and new, which might be the point. You see, Vollpension is staffed entirely by the elderly. They also double as bakers, bringing their lifelong knowledge of making cakes to a younger generation who might stop by to eat and visit.

UniCredit, the global banking and financial services company, sponsored the competition - a big win for the three-year project. “Getting the big business players engaged and interested in these kinds of discussions and issues is the hardest frontier,” says Gorgi from his home in Germany. For the bank, which has launched a social impact programme, it provides access to potential future clients, widening further their ecosystem.

Getting the big business players engaged and interested in these kinds of discussions and issues is the hardest frontier.

One of these future clients might be the One Night Gallery, a venture that supports Romanian artists, and which features their work in worn-down and neglected spaces around Bucharest. The aim of the gallery, another winner of the competition, is to use art and culture to help revitalise some of these areas while also supporting and promoting local artists.

While these are positive developments that could boost the success of social ventures, the project director is careful not to make it sound as if the future is rosy. He still sees many obstacles, even just in language, with people working in the social sector speaking differently to those in commercial business. Social entrepreneurs and impact investors tend to straddle both. “It’s still quite a challenge, I think, and there’s still a long way to go in order to find common terminology and, ideally, establish these effective structures of partnerships and support.”

Bridging gaps between investors and entrepreneurs

One of the course’s ambitions is to help impact investors and social entrepreneurs learn from each other. It can be a challenge because of a gap in their perspectives. Although they’re both looking for impact, Gorgi observes, investors are sensitive to risk and usually want to see a decent return on their initial investment. However, issues such as poverty, inequality and racism don’t tend to offer good rates of return.

He believes social entrepreneurs can help bridge this gap in a couple of ways. Inclusivity, for instance, is an issue on which they are ahead of their more commercial counterparts. German data suggests that women make up 50% of social entrepreneurs in the country. “If you’re interested in promoting gender equality and female entrepreneurship as a policymaker or an investor, it would be a good idea to look into these stats,” he suggests.

Another possible area where the interest of investors and social entrepreneurs can overlap is with leadership. Social enterprises and organisations like them tend to have strong democratic principles that foster a stakeholder approach, with employees consulted on decisions, rather than simply seeking to appease shareholders and reward short-term profits. The project director thinks they could be a “testing ground or breeding ground” for new ways to govern, steer and manage organisations.

On the other side, Gorgi believes that impact investors can support social entrepreneurs in fine-tuning their business model and its strategies. That includes how their impact is reported on and measured to make sure that it’s robust and on track. Investors might even be able to partner up different organisations in their portfolio, giving people access to networks that they might not otherwise have. It’s these kinds of connections that the course is hoping to encourage.

The reality, however, is that an online course has its limitations. “People are interested, they sign up, they engage with some of the materials, but it’s really hard to keep track of how deeply they actually engage in the whole thing,” Gorgi tells Invest for Good. While the project is nearing its conclusion, the lead developer hopes the MOOC will stay available online beyond the three years. “We’re looking at partners to push that further, to keep hosting it and maybe also invest in developing it further. I think there’s a lot of opportunities to update it or go into areas that we weren’t able to cover.”

If you’re a social entrepreneur, don’t expect all the answers from the course. Instead, the modules and materials encourage people to ask themselves questions. For example, “How do I as an entrepreneur think about impact?” or “How do I come up with a measurement design?” The idea being that you apply your own problems to the course materials and work your way through them. “We tried not to spell out every little bit of detail,” explains Gorgi, “but to leave learners with a couple of questions in their heads, especially those that they could relate to their own ventures.” As he points out, many of these scenarios don’t have standard right or wrong answers anyway.

The innovative approach has won Gorgi and the programme a reward for excellence from USASBE, a community that advances entrepreneurship education. So far about 500 people have signed up to AIR, while another 6000 have watched videos of the course on its YouTube channel. These aren’t huge numbers, but the platform on which the course is hosted had to be self-promoted for budgetary reasons. Gorgi admits this has made reaching big groups a challenge as they didn’t have access to the promotional leverage of the big educational platforms.

However, there is rising interest in courses such as AIR in universities and business schools - a fact that Gorgi has observed first hand. A researcher at the Centre for Social Investment at Heidelberg University, he spoke to business students in Germany, Switzerland and Austria about the course topics and the challenges around measuring your impact as an investor, venture or enterprise, a focus of the course.

Having studied and written extensively on the subject, Gorgi believes that when it comes to robust measuring and accounting, it’s a question of being decades away, not years. “It will take time to get to some common understanding [of how impact can be measured] but that still shouldn’t hold us back from starting to engage with it.” He argues that both social entrepreneurs and impact investors need to engage in that process, not just one or the other.

“When you think about the sizable investments that some of these investors make, I think they do bear a responsibility to monitor and show this impact - and it shouldn’t be an exercise that you just do for the sake of it.” He adds that, similarly, organisations need to learn from measuring their impact and to use the results for transforming and improving their activities.

Another factor that he thinks is holding the field back is transparency around not just how you measure impact but how you broker deals. In a blog about impact investing, Gorgi compares the industry to a black box, because so much of it is opaque. He writes: “A certain lack of transparency at the individual deal level might be an essential part of a functioning investment market. However, to create a favourable ecosystem we need to get a better overview of major deals that form part of the new industry but are easily overlooked. These can serve as blueprints for new partnerships.”

To create a favourable ecosystem we need to get a better overview of major deals that form part of the new industry but are easily overlooked.

It echoes the thoughts of Alnoor Ebrahim, a professor at The Fletcher School of Law and Diplomacy at Tufts. Invest for Good interviewed him about his book on Measuring Social Change. He, too, believes that there needs to be more transparency in the field. He argues for investors to share data, especially if we’re to make meaningful comparisons in certain sectors. He predicts that there will be the emergence of third-party analysts who will pore over data at arm’s length from investors, similar to analysts currently working in finance.

While these concepts and ideas are up for debate, with consensus hard to reach, what most everyone can agree on is that we need change. However, we can’t just leave it to entrepreneurs and investors to push for this change. It requires everyone’s commitment. As Gorgi puts it, we need a “coalition of actors”. He calls on all of us to be changemakers in our own lives. While that might make it sound as if we need to go about changing the world, it’s more about taking smaller steps.

“Changing the world is a mouthful. And ‘everyone can play their part’ is a bit too simplistic. I’m really talking about practicable and real-world, yet ambitious things you can do,” Gorgi says. “If you have that passion or concern for some of these issues, then in your own area you can try to initiate things, even without knowing what it’s going to lead to.” It could mean talking to people you might not normally come across, opening yourself up to new ways of collaboration. It could mean pushing for change in organisations we all work for or support.

Even this conversation with Invest for Good is the start of reaching new audiences and talking to people who come at things with different perspectives. Because if you want things to change, it’s important not to stand on the sidelines.

Gorgi Krlev is the lead developer and project director of Accelerating Investment Readiness. He is a researcher at the Centre for Social Investment at the University of Heidelberg. You can follow him on Twitter @gorgikrlev.