The business building our empathy

Meet the woman launching a subscription box service for families looking to volunteer with their kids without leaving the house.

Jessica Jackley wants to change our relationship with volunteering, by making it easier for us to flex what she calls our “empathy muscle”. The entrepreneur has launched a new venture aimed at getting families to engage with volunteering without leaving the house and negotiating with the fickle whims of young people. Alltruists is a subscription box service which partners with nonprofits to deliver innovative content and activities for kids under 12. It allows them and their families to dive into issues such as homelessness, clean water, the plight of pollinators, and more.

“I really want to redesign, reframe and repackage volunteering,” Jessica tells Invest for Good from her Los Angeles home.

It’s only 9am and already it has been a busy morning with a photoshoot and back-to-back meetings. She’s squeezing this interview in while her youngest naps. With four children under 10, the founder of Alltruists is not exactly swimming in time but she wanted to somehow engage her children in being of service to others. “Volunteering is a core value to me,” she says over Zoom. “I grew up doing it and it shaped me and directed my life, so I wanted to do that with my family badly, but it’s very difficult to make that happen, especially with kids.” 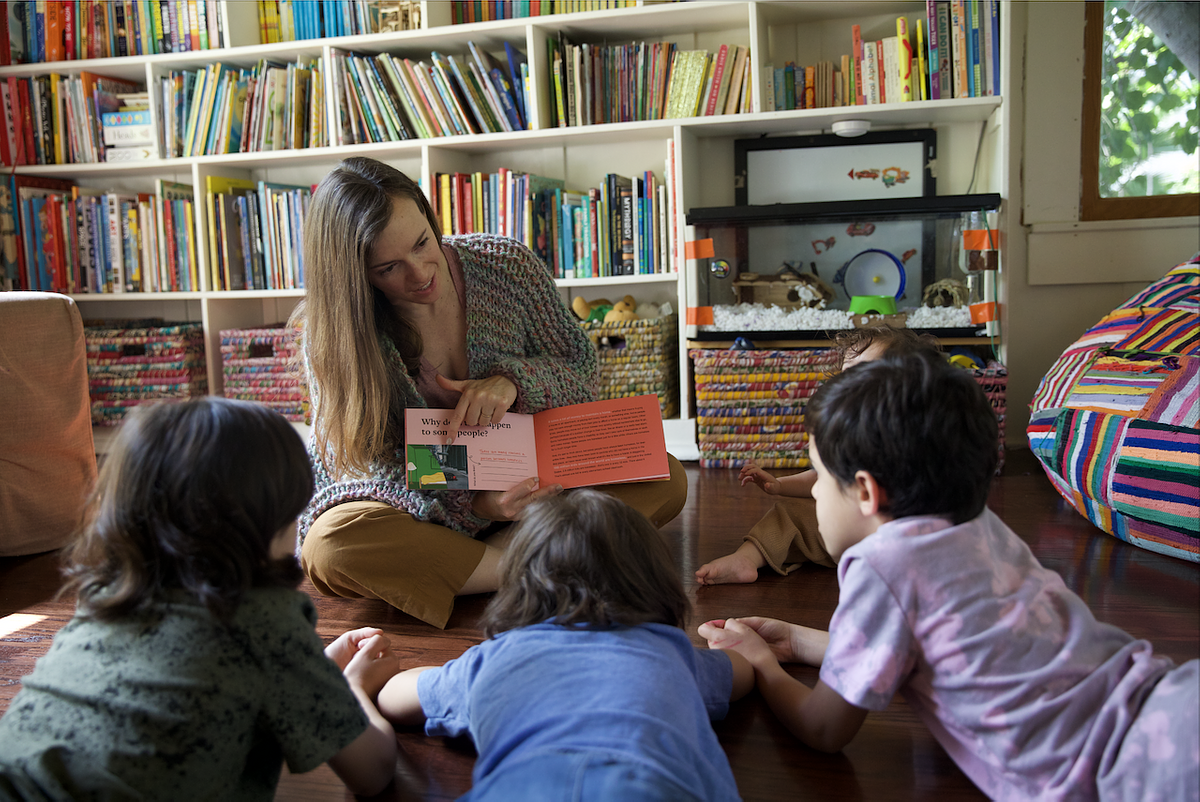 Alltruists: the world comes to your door

As COVID struck and we were all confined to our homes, she saw the world delivered to her door instead, with an array of activities that would come through the mail. Jessica started designing one-off, service-based projects for her family and neighbours and saw that they resonated deeply. She recalled her children engaging most with activities that illuminated life lessons drawn from the world. As someone who has launched successful impact-focused businesses before, Jessica is used to spotting opportunities others may overlook - and she saw potential in connecting kids to volunteering.

It’s estimated that volunteering in the US was worth nearly $190bn in 2018, with 6.9bn hours spent in strengthening communities nationwide. In doing some research, Jessica learned that 90% of people say they’d like to volunteer more of their time, with parents 50% more likely to volunteer than those who didn’t have children. So, it seemed to her that there was space to disrupt what is a giant and growing industry, starting with families first. “I thought, ‘Wouldn’t it be great if on a regular basis, in a regular cadence, my family and others could volunteer and we could have it be part of our identity?’” She wasted no time in creating Alltrusits and it has been a whirlwind since. 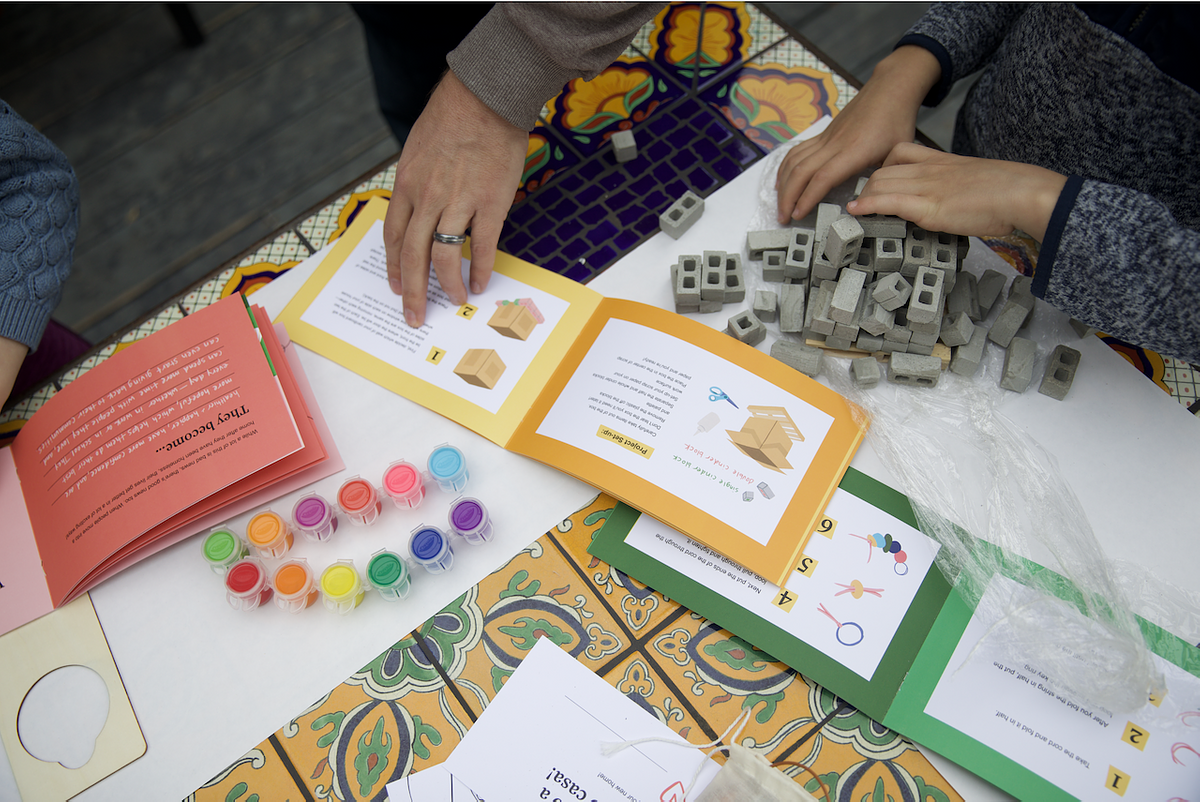 Holding up one of the subscription boxes, Jessica shows how it can itself be turned into a fun activity for kids to explore. The box about bees and pollinators, for example, turns into a pollinator hotel. There is a serious side, however, with a mini book that helps parents talk their children through some difficult issues and questions. Delivered every month, the boxes include empathy and volunteering activities that are created with the input of a nonprofit.

In their first box, Alltruists partnered with New Story, a charity that creates innovative housing solutions, including 3D printed homes. Children are given the things they need to make a colourful keychain for people in Mexico moving into their very first home and given their keys.

“I think it’s really crucial,” argues Jessica, “to stop and pause and do our best to understand the experiences of others,” 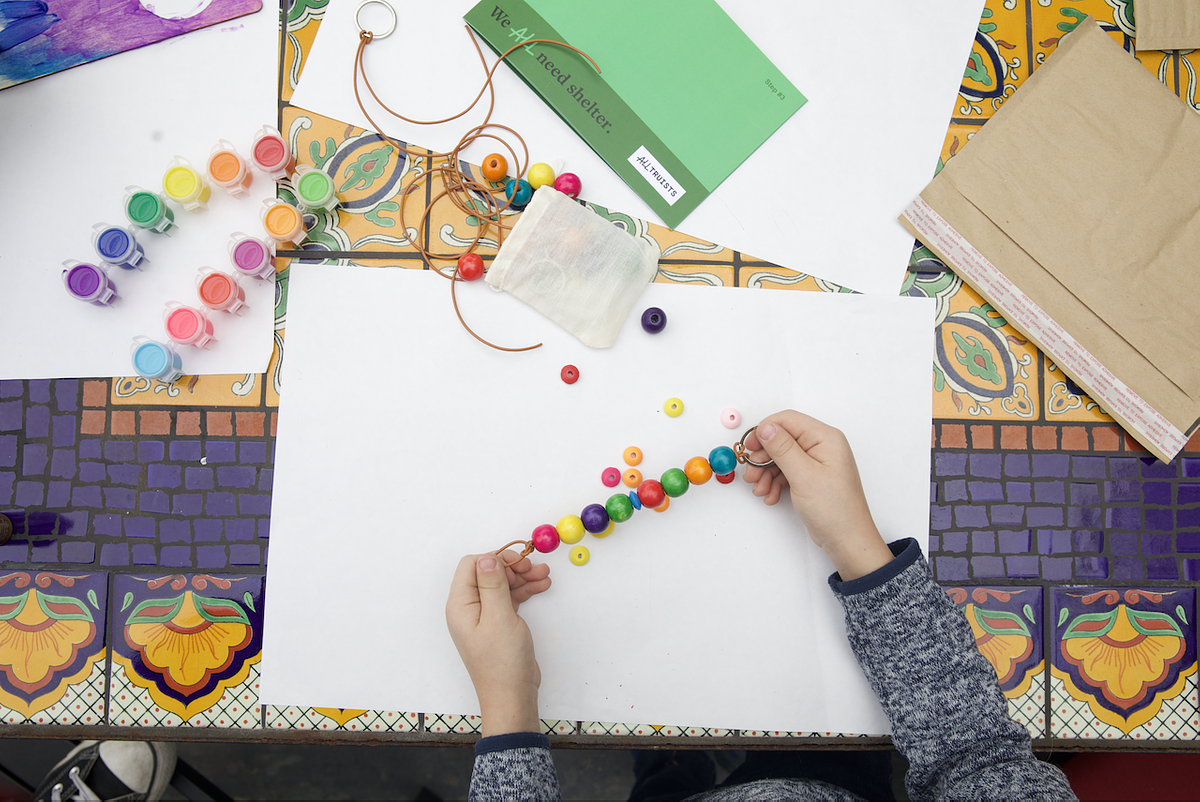 These activities, she adds, helps kids to “deepen their understanding of what it might look like for somebody else on this big planet”. Finally, children are able to direct $5 to their favourite of three nonprofits tackling the issue in different ways.

Drawing on past experience

A seasoned entrepreneur, Jessica’s experience in the giving space is extensive. She’s best known for co-founding Kiva, a microfinance organisation that allows people to loan small amounts of money to people worldwide, whether it’s to start a business, fund education or help their community. At the time of starting Kiva in 2005, there wasn’t much like it that really capitalised on new technology. It benefited from good timing, too: its launch coincided with the UN’s international year of microcredit. One of Jessica’s mentors, Muhammad Yunus, went on to win the Nobel Peace Prize the following year for loaning billions to people excluded from traditional banking. It enabled Kiva to ride a tidal wave of publicity.

Today, Jessica’ entrepreneurial background has connected her to a range of powerful and successful people. She was able to call on some of these friends and family to raise a small pre-seed round for Alltruists. People like Randi Zuckerberg (as in sister to Mark) and Adam Grant, the bestselling author and global management expert, jumped on board. Most of her early stage investors are women and mothers. “I look at those investors and each one of them has an amazing superpower,” she says. 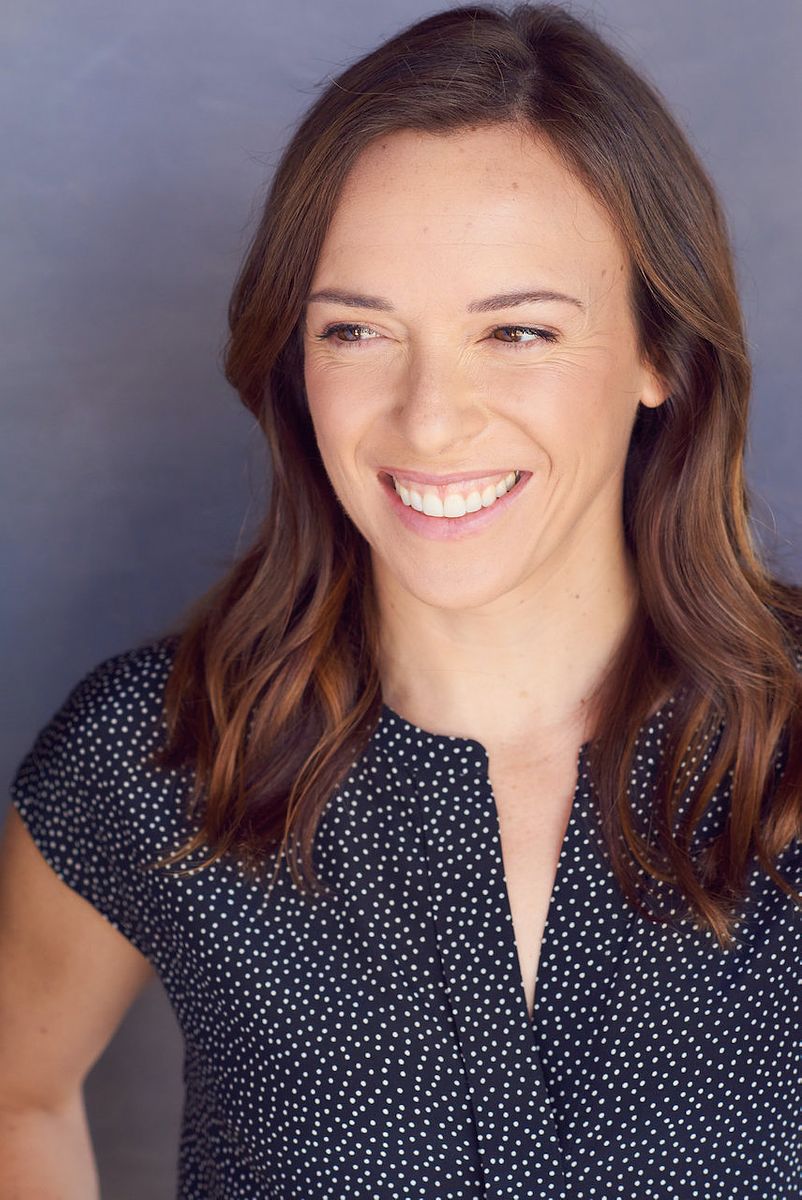 In addition to that, she virtually participated in the Y Combinator, a seed money startup accelerator that has been used to launch the likes of Airbnb and Stripe. That led to a second round of contributions. At the time of writing, Alltrusits has about 200 subscribers. Her hope is to have the business cash-flow positive in the next year or so. “What’s great about these investments,” the entrepreneur notes, “is that I can really step on the gas a little bit so to speak and get there more quickly than I would otherwise.”

Of course, that’s not always the case for many entrepreneurs. Those starting out are unlikely to have the network to get their businesses backed by influential people. Jessica - who teaches an entrepreneurial class at the University of Southern California - advises young changemakers to work out what their strengths are and then to “go spearfishing” for the skills you’re weak on. Do your research and find the individuals who can help you, she suggests, and don’t be afraid to reach out with targeted questions. She believes this approach is more likely to lead to an enthusiastic response from people with the right expertise.

If you’re really lucky, someone might find you instead. In this vein, Jessica has partnered with Yohei Nakajima, an investor, on a very early stage venture capital fund called Untapped Capital. The idea is to hunt for and find the early-stage entrepreneurs who otherwise might get lost in the system. The focus is on underrepresented founders or those from small-town America, the kind of people who don’t have connections to places like Silicon Valley. “We’re not trying to get in on the same deal that’s going to get funded by everyone else,” Jessica confirms. “I loved this approach so much. I was like, ‘How can I help?’” 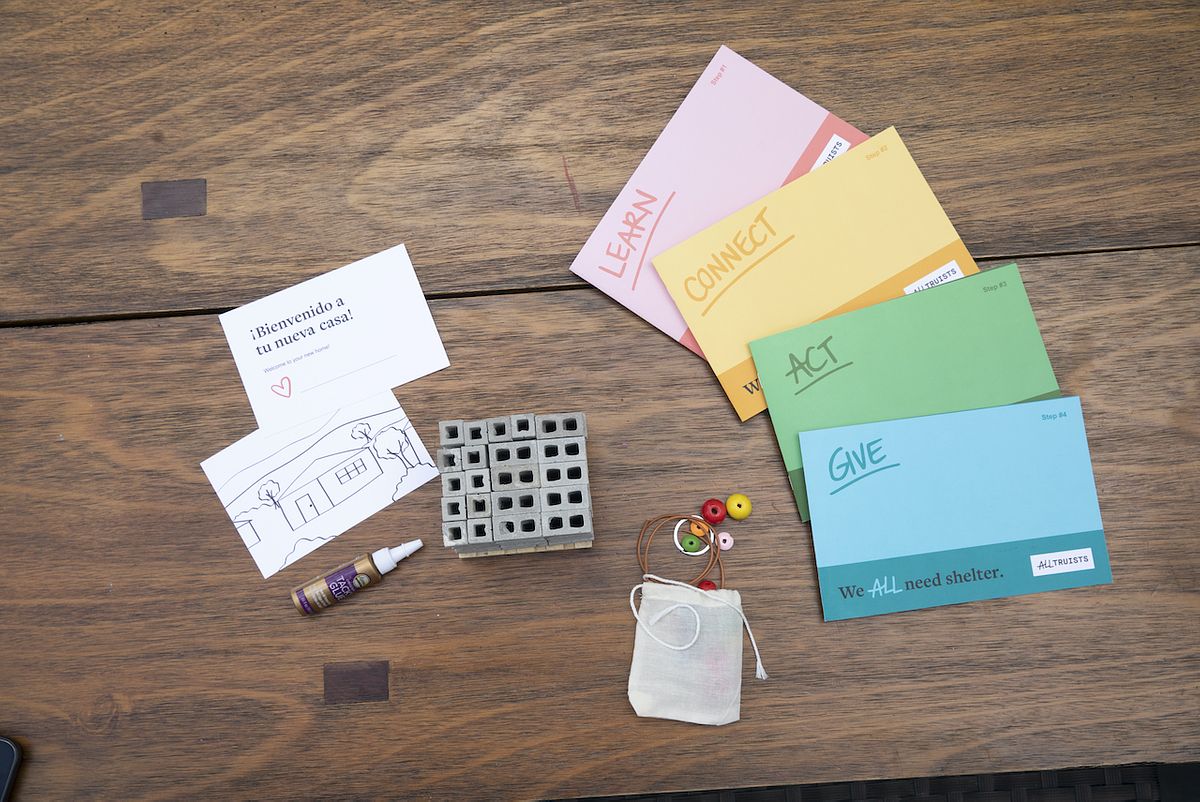 So far, Untapped Capital has found MilkRun, an Austin-based startup that is focused on locally produced groceries that come direct from farms. Another of their investments is Windmill, a company that produces energy-efficient and modern air conditioning units that lessen their environmental impact. Untapped Capital doesn’t focus solely on social-impact companies, but Jessica and her partner Yohei look for founders  who show early promise and some sort of intention, asking: how do they see the world, what are their goals, and what culture are they hoping to build? Every company in their portfolio measures their impact differently, Jessica says, and that is okay with her as long as they’re doing it.

No such thing as business neutrality

As she points out, there is a myth that you can run a business and remain neutral - a view with which she disagrees.

“Whatever you’re doing has an impact, good, bad or ugly, and it’s best to look it straight in the eye and figure out what it is and make it better all the time.”

Nobody gets a free pass, Jessica adds, on how they manage their footprint or how they deal with the consequences of their actions as companies or entities. She believes the organisations that best factor in their “comprehensive impact on the world” will win in the end, because they will have thought about how to make themselves sustainable. “This isn’t optional any more,” she argues.

It’s no coincidence, then, that Jessica’s overall ambition with Alltruists is to “activate more goodness in the world”. It has to be something meaningful, she insists, to keep her away from what is most important in her life - her family. Having small children is something she believes has made her more focused and determined, because she doesn’t have time to waste on distractions. 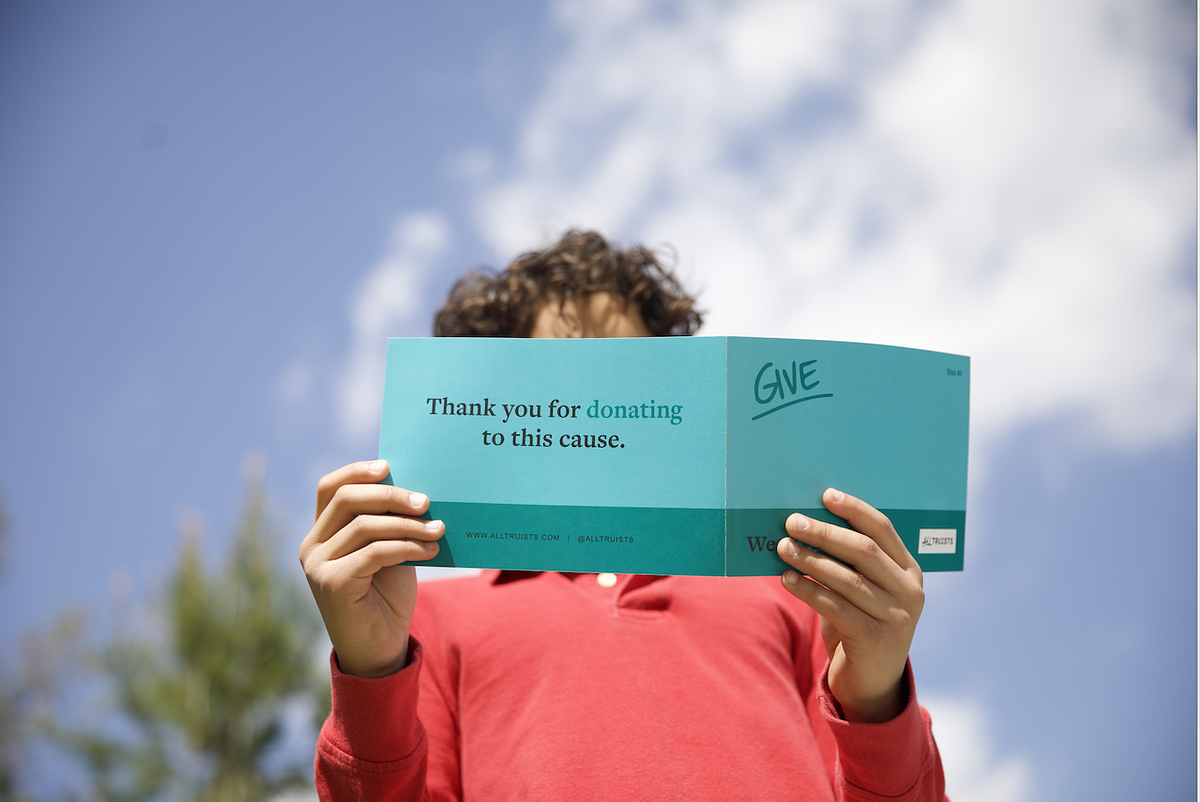 Asked about whether she worries about failure, she shakes her head, explaining that she avoids that type of language with her children and with herself. At 43, she’s become increasingly comfortable in her own skin and being clear about what she wants. “I want this to be successful,” she tells Invest for Good, “but if Alltruists stays small and there’s not as much demand as I thought and we end up only lasting for a little while, is it still good that we started these conversations around issues that I think really matter to the world? Yes, I think so.”

Jessica Jackley is the founder of Alltruists, general partner at Untapped Capital, and teaches social entrepreneurship at USC’s Marshall School of Business. She also served as Disney Imagineering’s first entrepreneur-in-residence.